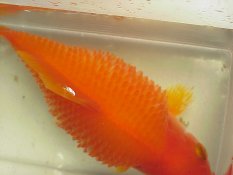 Here’s a link to my Youtube Video On Dropsy

“Dropsy” is the condition in which the body is diffusely infected with bacteria and the scales generally stand out from the body. In some cases, this is also caused by Costial infection (see parasites) but usually it’s a terminal result of the bacteria attacking the KIDNEY of the fish. Many treatments have been tried with only a one-to-five percent favorable outcome.
Dropsy, also known as Bloater or Pinecone disease, is usually caused by bacterial invasion of the fishes’ kidney. There IS a sporozooan parasite that can damage the Kidney this way, called Mitraspora cyprini, but I have yet to see this on a necropsy. Dropsy is, for all intents and purposes, untreatable, based on 7 years experience, using the following drugs: Azactam, Baytril, Chloramphenicol, Gentamicin, and Amikacin. I have tried a Sulfa drug, brand name Albon, and that did not resolve the problem either.
Bacterial dropsy is usually caused by Aeromonas or Pseudomonas bacteria. By the time the fish “blows up” and the scales protrude form the body, the damage to the kidney is so profound that recovery is impossible. If you must try to save the fish, Isolate the specimen, elevate temps while elevating oxygenation, and begin injecting antibiotics intraperitoneally. You could also feed the antibiotics in a medicated feed

You read alot about people using Epsom Salts and Peas and a variety of other medications, even Erythromycin with almost 100% success. They’re unable to present a SINGLE BIT of documentation on their regimen or dosing, and most notably, a SINGLE before and after photo. People overstate things. They’re not liars necessarily. But some are.
Dropsy is characterised by the raising of 100% of the scales on the body and BULGING EYES – without ALL scales being raised, and if the eyes don’t bulge, I have my doubts that true Dropsy is present.
Dr Erik Johnson