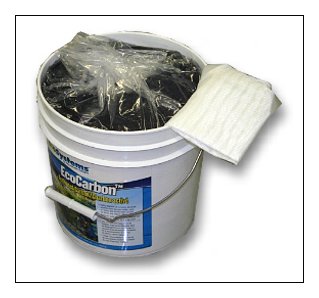 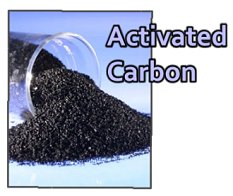 Activated carbon is currently used in numerous applications ranging from the decolourisation of sugars and sweeteners, gold recovery, colour/odour correction in wines & fruit juices, to the treatment of drinking water. Even the ancient Egyptians knew of the beneficial properties that charred coal had in improving the quality of drinking water.
Activated Carbon is typically used in three different areas of aquaculture: 1) taking impurities out of water as it is brought into a facility; 2) removing halogens (any of the five elements fluorine, chlorine, bromine, iodine, and astatine that form part of group VII A of the periodic table and exist in the free state normally as diatomic molecules); and 3) removing color and metabolic by-products in re-circulating systems.
What is Activated Carbon?
Activated Carbon is a crude form of graphite and is commonly made from wood, coal, lignite and coconut shell. The imperfect structure of activated carbon, which is highly porous, is what differentiates it from graphite. These pours range in size from visible cracks and crevices to microscopic dimension. This structure gives the carbon its very large surface area, which allows the carbon to adsorb such a wide range of components. Activated carbon has the strongest physical adsorption forces or the highest volume of adsorbing porosity of any substance known to mankind (5 grams of activated carbon can have the surface area of a football field).
How is Activated Carbon Made?
A substance is first subjected to a heating process called carbonization. This forms a fixed carbon mass that is full of tiny pores. It is then activated by a second heat/steam treatment (200 -1600oC) while regulating oxygen level. This is what creates the huge internal pore network and imparts surface chemistries that give carbon its unique filtering characteristics. There are 3 main forms of activated carbon: 1) Granular – irregular shaped particles ranging in size from 0.2 to 5mm, 2) Powder – pulverized carbon, 3) extruded & cylindrical in shape.
How Activated Carbon Works

Activated carbon removes organic compounds from aquaria by adsorption and absorption principles. Both processes involve the transfer of the pollutant from the liquid phase (water) to the solid phase (carbon). Adsorption is the primary sorption mode used to remove pollutants. This attractive force forms a bond between the carbon and the adsorbate (pollutant) causing the adsorbate to adhere to the carbon. In addition, bacteria will colonize the outer surface of the activated carbon and consume some of the sorbed organics. The bacterial action also reactivated a small portion of the carbon and perhaps prevents desorption.
Absorption refers to the diffusion of a gas or compound into the porous network where a chemical reaction or physical entrapment takes place. Ozone for example is absorbed into activated carbon where it oxidizes a portion of the carbon’s surface. Ozone (O3) is reduced to oxygen (02) thus detoxified and made safe for the pond. Ozone does not accumulate or build-up in the carbon structure.
A third process called chemisorption forms an irreversible chemical bond between the carbon surface and the adsorbate. Pollutants are tightly bound to the sorbent.
All three sorption processes occur simultaneously in the pond. The sorption process takes place in three stages:
1) Organic laden water contacts the activated carbon particle.
2) The adsorbate diffuses into the porous network.
3) Sorption onto the carbon occurs.
These activities can be described as the activities observed in a parking lot. Vehicles (organics) are moving freely on the main highway (pond water). The vehicles enter the lot (pore) in search of a parking space (sorption site).
Benefits of Activated Carbon
Due to the sorption process that occur with activated carbon, it is very effective at removing toxins (insecticide and plant), some chlorine and chlorimines, and organics that may discolor your water. The overall result is an increase in water quality. The by-product of better water quality is healthier fish. The activated carbon should have a macroporous structure, Low Iodine number which is a measure of the microporosity (below 600) and a high molasses number which is a measure of macroporosity (above 400).
All carbon will release some phosphate. It is best that one looks for an activated carbon that has not been activated using phophoric acid. Phosphate levels released by Carbons that were activated by means other that using phosphoric acid are low and not harmful to the pond or its inhabitants.