“Warm water carries less dissolved oxygen than cold water. Aeration becomes of paramount importance in the summertime. In the winter, low dissolved oxygen would be just about impossible. Trasnporting fish is dangerous in warm weather. The use of some ice packs in the water tank with the fish may reduce losses.” Doc Johnson
Aeration or “oxygenation” is perhaps one of the most important factors governing your success in the pond with your fish.
Inadequate aeration can cause deterioarted filtration performance, because the bacteria consume prodigious amounts of oxygen in the reduction of Ammonia.

Also, fish require a sufficient amount of oxygen as well. Especially when being medicated, or when their gills are under attack by parasites or “bad” water quality.

One way to increase aeration is to employ a large airstone. More effective, is the use of a “venturi”-equipped pump-return because aerated water is returned over a larger area, and even more effective, a water fall or other water feature which disrupts the surface of the pond alot. I usually advise folks, if you can hear your pond splashing and babbling from ten feet, there’s probably enough oxygen. (At least within the eight or so feet of the feature).

Signs of inadequate aeration include gasping at the surface, or if less severe, the fish do not play – they just act lethargic.

There’s alot more in the book on dissolved oxygen, how to test it, and what medicines consume D.O. – – Even how much dissolved oxygen they consume. Another section describes a compound (hydrogen peroxide) which actually ADDS oxygen to the water in emergencies and so the book might be just what you’re after.
Aeration is under estimated in importance. You may have “adequate” oxygen levels but not necessarily optimal levels. 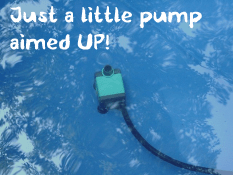 There is probably an article on “flooming” in this web site. It’s the process of putting a little pump on the bottom of the pond and aiming it at the surface to create a slight swell of rising water on the surface of the pond. This is critically important in very deep ponds because oxygen penetration to the bottom of deep ponds is very challenged.
Dr Erik Johnson