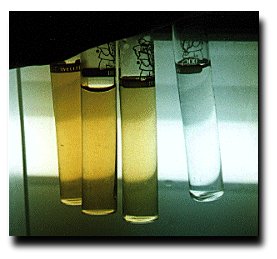 Ammonia – Understand this! – by Doc Johnson
Ammonia is the first waste product of your fish. It is often the cause of your first mortalities in new facilities and new ponds. There is a simple test to measure the levels. I am a big fan of Kent’s Ammonia Detox to reduce the toxicity of ammonia, and of Enviro Reps BRF13A (Ammo Down) for the seeding of beneficial bacteria to reduce the ammonia on the long term.

I discourage the use of chemicals for Ammonia binding. All but a few of them contain aldehydes (glutaraldehyde) which are guilty of binding oxygen and irritating the fish.
Wet dry filtration (versus submerged media) is very superior for supporting nitrifying bacteria.
Additional notes:
“First of all, because the test is foiled by fewer organic molecules, let’s establish that Salicylate test kits are superior to Nessler’s tests*. Still, Ammonia testing can present a problem. You may not know that dechlorinator can zero-out your ammonia test. The reason is that in the salicylate test kit, chloride ions provide a reagent. Ample dechlorinator and other ammonia binders will zero out this free chlorine reagent and show you a zero test. The only way to be sure that the Ammonia is truly bound up is by “live-tissue cell culture histopathology”. Cells are bathed in test-water and then examined for tell-tale signs of Ammonia damage. The only company that has done this so far is Aquarium Pharmaceuticals who used Drs Lukert and Gratzek at UGA. This Ammonia binder does not contain any aldehydes. Even the so-called “Sulfide Ion” binders are often nothing but Formaldehyde-bi-sulfite (rongalite) which is  unstable.” Doc Johnson

*Nessler’s may be off the market now due to Mercury.