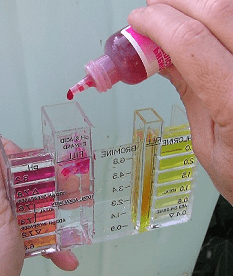 Carbonates Support pH But Can Be Exhausted.

Carbonate balance is a long subject but I intend to keep it brief. I will over simplify for greater understanding. As we mentioned before, pH is a measurement of Hydrogen ions in the system. Hydrogen ions can come from the reduction of Ammonia and several other biological processes. We mentioned that in the absence of carbonate molecules, these Hydrogen ions would drive down the pH.

Carbonate molecules come from several places. Sometimes, they occur naturally as a result of the dissolution of rocks like Limestone and Dolomite. These rocks are made of Calcium and Magnesium carbonate. When these rocks dissolve they release those minerals, plus Carbonates.

Unnaturally, the carbonates may be supplied directly in the form of Sodium bicarbonate. Indeed this is nothing more than  Baking Soda.

The net effect of the carbonate molecules on the water is to hold the pH at some, constant level. This is why there is a benefit in knowing the “number” [quantitative] measurement of carbonate activity.

When you’re measuring the carbonate levels in a system, it’s known as a test of the “Total Alkalinity” of the system. There are affordable Total Alkalinity test strips at most major garden centers and pet shops. Pools supply stores also provide very reliable strips that measure TA.