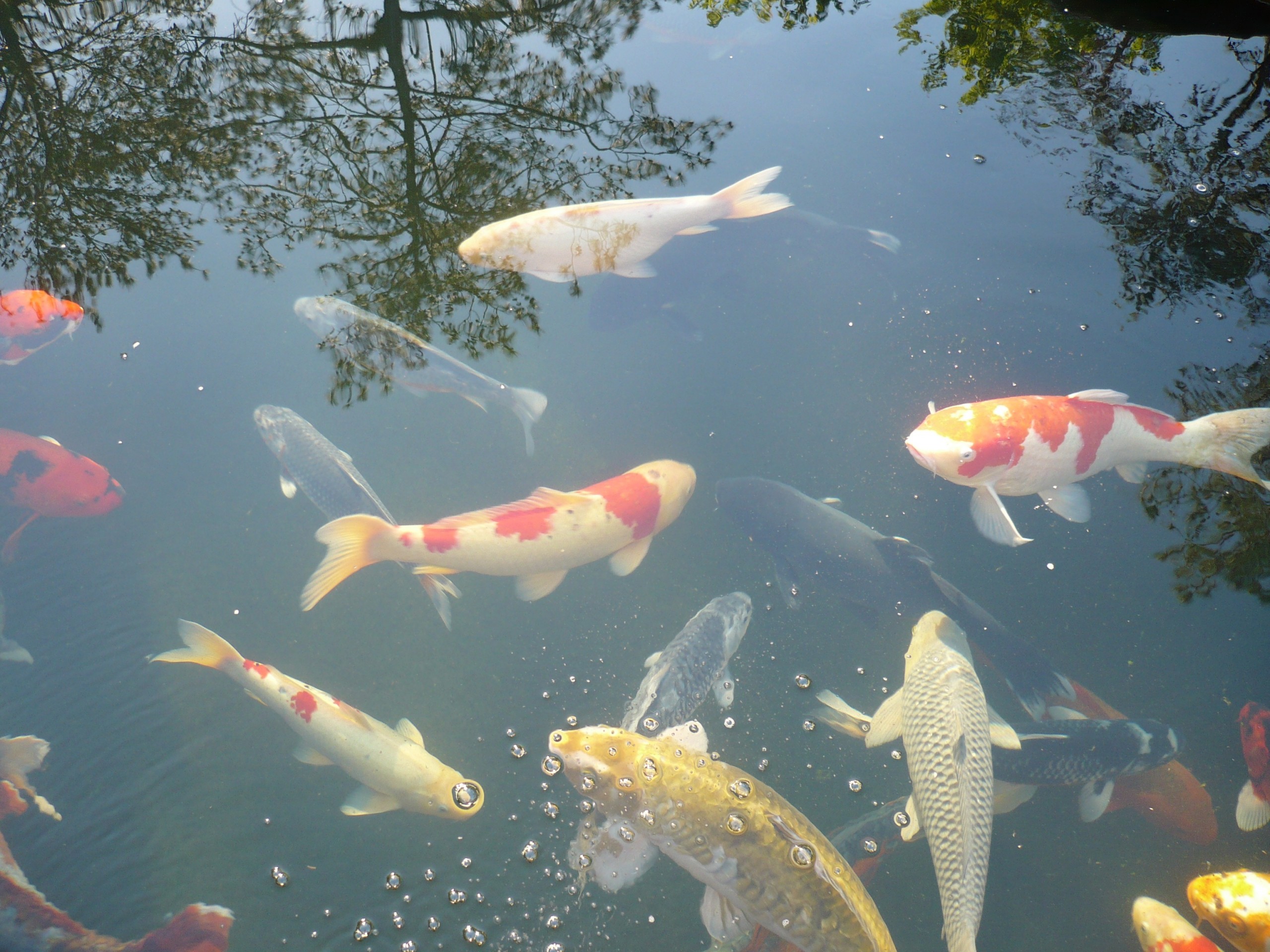 Cat Litter for Koi Ponds and Water Quality?
Written by With Chris Neaves

Cat Litter for Koi – by Doc Johnson
SO, finally, Chris Neaves settled down and did the definitive article on this subject, cutting through the CRAP, you know; the “aways” and “never” and “best” assertions made by so many people, and simply boiling it down to fact. I think the following article is superb. Please read, with appropriate gratitude to Chris for putting it all down.
Well, for a while, there were a lot of discussions about cat litter. Someone found out that cat litter was made of Bentonite. Then some air head said that clinoptilolite was better. Then a smarter person noted that these compounds are one-and-the-same. Then the discussion turned to whether kitty litter could be used as a water conditioning clay, for ion exchange, for donation of carbonate alkalinity and for donation of valuable minerals. People did some damage to their fish with scented litters. Then people honed in on the “good ones” to try.
Hi, Some clarification is needed here. First off… clumping kitty litters are Sodium or Calcium Bentonite clay…. Montmorillionite clay…all the same thing. Kitty litter’s can be used but are not generally recommended. The large size of the particles makes them hard to dissolve and they can clog up bottom drains and plumbing. They generally are not very pure either.
There are a number of products on the market such as Refine and Refresh that are much better. They are very pure and a very fine powder. You can get clay from a number of other sources also…Foundry’s, mining companies, drilling companies, etc.
They help with water clarity and the mineral content of the water, but they will do nothing to help with ulcers.
Here’s an article by Chris Neaves from South Africa on clays. Tom Lansing re-posted this, for another person, the other day on the NI board.
Lots of good info.

In reply to the questions on montmorillonite on the message board regarding clay I post this essay again –
The description of montmorillonite is :- one of a number of clay minerals within the Smectite Group. It forms by weathering or hydrothermal alteration of other aluminum-rich minerals, and is particularly common in altered volcanic ashes called bentonites.
The description of bentonite is :- a native, colloidal, hydrated, non-metallic mineral of the Smectite Group that is primarily composed of the mineral montmorillonite.
And further – Montmorillonite is a member of the general mineral group – the clays. It is the main constituent in a volcanic ash called bentonite.
One of the confusing aspect of commercially available montmorillonite clays is the use of two names for exactly the same mineral.
Montmorillonite clays are bentonite clays and bentonite clays are montmorillonite clays. They are not two separate minerals as we think. They are one and the same thing. All types of bentonite clays are grouped together under the Montmorillonite or Smectite group of clays. To speak of one is to speak of the other.
Marketing of various brand names using the different terminology for the same thing, in the same text, is often responsible for the confusion that arises.
Montmorillonite was named after its discovery locality, Montmorillon, France in the 1800’s. Bentonite was named after Fort Benton, Montana, near which it was discovered.
It is typically white, grey, or buff in colour but may have tints of yellow, pink, or blue. Montmorillonite has a pearly or dull lustre and is translucent. Montmorillonite clays are mined in various parts of the world. Deposits are found in Italy, Greece. Cyprus, the Philippines, South Africa, Brazil, England, Japan, Romania, Germany, Mexico, Argentina, Spain, India, Hungary, Poland, Canada, Turkey, Florida, Georgia, Illinois, and Texas.
Various purities are found in different regions. In some parts of the world montmorillonite clays were formed during the Jurassic period many millions of years ago. Others originate from later periods. Just like all minerals in the earth, the quality of the deposit will vary from area to area and country to country. Whilst some are of excellent quality others are not very pure.
Because montmorillonite clay is used as a human health food as well as in the fish industry, claims by health experts make interesting reading. An average mineral analysis of Montmorillonite by health experts demonstrate it contains no less than 67 minerals, including vital trace minerals. Recently it has been recognized and utilized by the cosmetic industry and by soil experts, who value it as an exceptionally good agricultural enhancement: crops grow faster, taste better, and are more resistant to disease.

Montmorillonite contains a balance of minerals in their natural colloidal form, making it easily assimilated. The minerals present in montmorillonite enhance the production of enzymes in all living organisms.

Some deposits contain only 30% – 40% of its base elements (montmorillonite). This is considered a low grade in the mining industry. In order to improve the grading (purity) some products have to be refined or processed. The other 60% – 70% of unwanted material has to be removed. Only after refinement does it achieve a 80 or 90% purity as claimed.
Montmorillonite are naturally mineral rich clays, formed many millions of years ago under certain geological conditions – therefore, it appears that some products have a percentage of minerals added to bring the quality up to an acceptable level.
There are several forms of montmorillonite available on the market. Some products are a pure montmorillonite clay. Others are a less pure form and have to be processed to remove and eliminate impurities they are mined with. Some claim to have bacteria additives. Some may have additives to the clay such as extra minerals, above what is naturally found in the clay. Whilst others are a montmorillonite clay / zeolite powder formulations.

Montmorillonite clays, depending of the chemical composition and purity, enhances water quality, replenish and enhance minerals and remove certain unwanted wastes. The uses and benefits go further than this. Montmorillonite improves the lustre and skin quality of koi as well as heightening the colour. Added to food it is claimed to aid digestion and increase the koi’s ability to assimilate the vitamins and minerals required in their diet.

Some claims are made that organic waste such as DOC will be removed from the pond. The ionic exchange capacity is increased. i.e. The scum on the pond can be reduced and perhaps eliminated by using Montmorillonite.
The idea that Montmorillonite clays could be used in the remineralisation of ponds originate in Japan. Natural mud ponds are lined with bentonite to seal them. It was also discovered that feeding small quantities to koi and occasionally bathing then in it or adding regulated dosages to the pond resulted in wonderful and significant effects on their colour and lustre.
Montmorillonite can be easily added to your daily ration of food in small quantities. This is an excellent idea as it will replicate the koi feeding continuously off minute mineral rich particles on the floor of mud dams.
By treating Montmorillonite with soda ash, the meta-bentonite Sodium Bentonite, can absorb water and swell to about 20 times their dry volume and give rise to permanent suspensions of gellike masses. The sub-bentonites, containing calcium become Calcium Bentonite or Montmorillonite, do not swell to this extent but are still capable of absorbing from their surrounding at a phenomenal rate and contain as many minerals as Sodium bentonite. Calcium bentonites are nonswelling and break down to a finely granular aggregate that is widely used as an absorbent clay.
Bentonite/Montmorillonite is used to seal dams, in bonding foundry sands, asbestos, and mineral wool, as drilling muds, in portland cements and concrete, ceramics, emulsions, insecticides, soaps, pharmaceuticals, and paints, in the manufacture of paper, for clarifying water, juices, and liquors, and as a water softener to remove calcium from hard water, removing colour from mineral and vegetable oils, also used as catalyst supports and absorbents in petroleum refining
The montmorillonite minerals are composed of hydrous aluminum silicates in the form of extremely small particles. They take up water between their layers, causing swelling, and change the interlayer spacing according to the mineral variety. In addition to being involved in inorganic exchange reactions, they react with and absorb some organic liquids, such as amines, glycols, glycerols, and other polyhydric alcohols.
For the koi hobbyist montmorillonite is used directly in the pond water each week in the recommended dosage. Some types disperse more easily than others. Some have to be mixed with water before application whilst others can be sprinkled directly onto the pond surface. The pond will clear in about 6 – 10 hours, depending on the amount of organic material in the pond, but the montmorillonite will remain active. Do not be worried in a new pond if the water does not clear in a day or two. The organic material such as algae is limited in new ponds.
Also the clay can be mixed with the food. Coat damp pellets lightly with montmorillonite. Feed a few times a week. Montmorillonite also makes a wonderful, cheap face pack. Try washing your hands with it – the skin feels wonderful afterwards.
Regards,
Chris Neaves