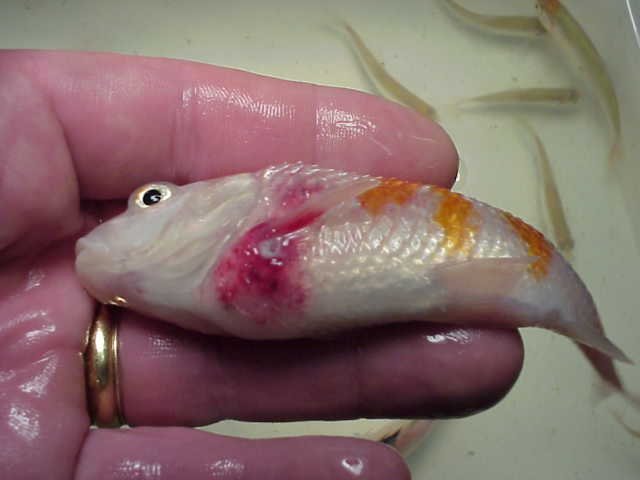 Investigation of the Safety and Efficacy of Chloramine-T in the Treatment of External Fluke Infestations
Jill V. Spangenberg, DVM, PhD (Pharmacology and Toxicology)
e-mail: jvspangenberg@ucdavis.edu

Dr Johnson notes:
“Folks treating every day often have red fish by day three or four. I recommend that you would only treat as often as needed to make an improvement, and stop at once if the fish begin to turn pink on you. Do NOT let this stuff through your filter. Using this for Flukes, past the development of simpler, safer methods like Biltricide/Praziquantel – is contraindicated. Use of Chloramine T to control bacterial infections in the environment and ON fish is still perfectly viable. ”

ABSTRACT- Chloramine-T (n-chloro-para-toluene sulfonamide sodium salt) was investigated in the search for an effective and safe flukicide for goldfish and koi. Use of Chloramine-T for this purpose has been previously described, but details were not readily available. Fingerling koi maintained at U.C. Davis were exposed to concentrations of chloramine-T between 5-20 mg/l (ppm) for four-hour static bath treatments. These exposures were not associated with any mortality or histological evidence of toxic effect. Furthermore, successful treatments of infested koi, goldfish and tilapia were achieved with no mortality or untoward effects following two four-hour bath exposures to 20 mg/l chloramine-T. Treatments were administered every other day for a total of two times. Water hardness, pH and temperature need to be considered when calculating a dosage for chloramine-T; hard water and high pH is associated with a wider margin of safety.

Gill and skin flukes are common external parasites of koi presented to the Fish Health Service at the University of California, Davis. Therapeutic compounds commonly employed by koi hobbyists in attempt to treat external fluke infestations include salt, potassium permanganate, formalin (alone or in combination with malachite green), Fluke Tabs®, organophosphates (such as malathion, trichlorfon or Masoten®, Dylox®) and praziquantel (Droncit®). There are various difficulties encountered with these agents.

Problems with commonly used treatments center around efficacy (i.e., a compound may not work effectively) and potential toxicity (to either the fish, the person applying the treatment, or the aquatic environment downstream). As examples of the former, we have increasingly observed salt and formalin to be ineffective for fluke eradication. This is presumably due to increasing resistance amongst strains of flukes that have been chronically exposed to these treatments. Potassium permanganate regimens, while usually effective, are sometimes complex for individual hobbyists to implement, and carry a fair degree of risk if excessive doses are delivered accidentally. Praziquantel is effective but expensive, and therefore is not usually a practical treatment for fluke infestations in the pond setting. Organophosphates, either used alone or in combination with a carbamate (as in the Fluke-Tab® product), have the multiple problems of developing resistance in the flukes (decreasing efficacy), potential toxicity to the fish if over-dosed, and environmental concerns (as well as safety concerns for the person applying the treatment). It was the desire to find a safe, effective, and easy to administer alternative that led to this investigation of the flukicidal properties of chloramine-T with koi.

Chloramine-T (n-chloro-para-toluene sulfonamide sodium salt) has traditionally been used to treat external bacterial infections in salmonid aquaculture (“Bacterial Gill Disease”; Bullock et al., 1991). It is under review by the FDA for approval for this use in salmonids, which would make it one of the few compounds legally approved for use in food fish. It has also been reported to be effective for the treatment of monogenean trematodes (skin and gill flukes); this same report (Debuf, 1991) indicates that high doses may be toxic to koi. Chloramine-T functions by slowly breaking down to hypochlorous acid , with the release of oxygen and chlorine. The active ingredient is p-toluene sulfonamide (Booth and Macdonald 1988). Sunlight hastens the breakdown, therefore ponds should not be treated in bright sunlight, and the powder should be stored in the dark. Toxicity, as well as effective dose, is dependent upon water hardness, pH and temperature (Rach et al., 1988). In the hard, high pH water of the Central Valley of California, I found the following recommended doses to be effective and safe to small koi (Table 1).

The reported dosing protocol for treating external bacterial and monogenean infections was designed for flow-through systems with four hour turnover periods. Chloramine-T is applied as a bath treament at the appropriate dose based upon water pH and hardness; such a system will have completely turned over (and no Chloramine-T should remain) after four hours. The reference also indicates that this treatment can be repeated as needed up to four times consecutively (Noga 1996). In my trials with koi, I modified the protocol in the following manner to better approximate the recirculating pond environment of most hobbyists.

Small (2-3″) koi were housed at the U. C. Davis Aquaculture Facility in bare, indoor plasticated fiberglass tanks with minimal organic material accumulation present. Normally supplied with flow-through well water of 15-17 C (~59-63 F), the water flow to the tanks was stopped for the four-hour exposure periods (aeration was maintained). The fish were determined to be free of external parasites before the exposure (the initial part of the investigation was to examine toxic effects associated with exposure to normal doses of Chloramine-T only, not efficacy). Ten fish were maintained in each of six 75 liter tanks, representing low stocking density in a static but initially very clean system. No filtration was used during the exposure periods, therefore some build-up of nitrogenous wastes occurred over the four hours; however, the systems were still cleaner than the average pond environment. Large organic loads bind Chloramine-T as well as other compounds applied in the water, effectively lowering available concentrations; hence, a clean system with minimal organic material would ensure that the acting concentration was essentially the same as what was calculated and supplied. This in turn would maximize the potential for any adverse effects (a high organic load decreases the delivered dose of a compound such as Chloramine-T, and by so doing decreases the potential toxicity, as well as the efficacy; it essentially removes a certain amount of the drug from the water column). Hence, our exposure system approximated a worst case scenario with regard to potential toxic effects, in that the fish were small, there was no external filtration, and there was no organic load to remove drug from the water.

Chloramine-T was generously donated for this study by Argent Chemical. Tanks were dosed at 0, 2.5, 5, 10, 15, and 20 mg/l for four hours. The fish showed no visible signs of irritation or distress during the exposures. At the end of the exposure period, the fish were removed from their tanks, euthanized by overdose of Eugenol (an anaesthetic frequently used by hobbyists in our area), and tissues were collected for histologic examination . Gill, skin, kidney, and liver were the primary tissues of interest for potential toxic effects associated with the exposures. The tissues were examined by Dr. Gary Marty, our Board-certified veterinary pathologist who specializes in fish pathology. Dr. Marty found no evidence of any toxicity associated with any of the different Chloramine-T doses in the 60 fish used in the study (he did, however, observe a few unrelated conditions, such as incidental internal parasitism; such findings increase our understanding of normal and common disease conditions of koi).

Efficacy of Chloramine-T for treatment of fluke infestations was investigated more empirically. Over a two month period, I treated several tanks of small koi (2-3″), goldfish, and tilapia with 20 mg/l Chloramine-T as both static, four hour bath treatments (for the goldfish and koi) and flow through bath exposures (for the tilapia). Water in our area is very hard, and pH measures around 8.0, requiring the higher end of the dosage scale. I found that flukes did occasionally recur after a week if the fish were only given one treatment, so I increased the protocol for small koi to include a four hour static bath exposure every other day for a total of two treatments. If I had continued to observe flukes, I would have added a third treatment on the fifth day; this was never required at our facility.

In summary, Chloramine-T appears to be a safe and effective bath treatment for external fluke infestations. It is likely that the margin of safety in koi ponds may not be so great under conditions of lower pH, softer water, and high temperatures; therefore, hobbyists are advised to experiment with conservative doses (in quarantine tanks if possible) and proceed with caution if they have these water conditions. I would recommend taking the filter off-line during the four hour treatments, as I was not able to investigate effects of the compound on filter bacteria. During warmer weather, I would apply the compound when oxygen levels are highest (late afternoon usually, unless there are extensively cloudy days), and continue to aerate vigorously during treatment. Should the fish show any signs of distress, remove them to clean water (if treatment is applied in a quarantine tank), or perform a 20-50% water change on the pond. I repeat that it would be best to experiment with a small isolation tank before treating one’s whole pond, especially if unsure about the chemistry of the local water supply. This is worth checking, as municipalities do vary their water sources without notifying consumers, and alternate sources may well have drastically different characteristics than the normally supplied water.

Chloramine-T may well have efficacy against external bacterial infections in koi, as it does in salmonids; it may thus have a role in managing these problems as well (as an adjunct to the prime goals of keeping the pond clean, the water quality excellent, and the system not over-stocked). Chloramine-T is marketed by Argent as “BGDX”, for the treatment of bacterial gill disease, and is available through pond supply stores; it is also produced by other companies. It is advised that Chloramine-T not be used with formalin or benzalkonium chloride, and that users avoid skin or eye contact with the product. The powder and strong stock solutions should also not be allowed to come into contact with metal. Many suppliers consider it an under-utilized compound in the home pond arsenal. These results indicate that it may be an effective and more user/fish friendly alternative to some of the other compounds currently used by koi hobbyists.

“Folks treating every day often have red fish by day three or four. I recommend that you would only treat as often as needed to make an improvement, and stop at once if the fish begin to turn pink on you. Do NOT let this stuff through your filter. Using this for Flukes, past the development of simpler, safer methods like Biltricide/Praziquantel – is contraindicated. Use of Chloramine T to control bacterial infections in the environment and ON fish is still perfectly viable. ” ~ Doc Johnson