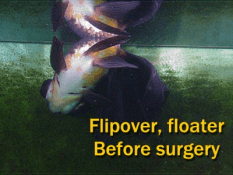 Greetings and welcome to my discussion of a groundbreaking new surgery to control the almost inevitably fatal Flipover condition in Goldfish.

“Flipover” is a condition in which an otherwise perfectly normal Goldfish begins to lose its natural ability to remain right side up in the water. In some cases, the inverted fish begins to sink, and in other cases the fish becomes overly buoyant and floats helplessly at the surface.
Many causes are suspected.

If you have a Goldfish which is flipping over, you should establish that the fish is receiving a mixture of foods including live or frozen foods, freeze dried krill and other nutrients.
It is not preposterous to try to ensure that the fish gets full spectrum lighting. The CoralIfe Trichromatic Fluorescent bulb is excellent for replicating the sun’s natural spectrum and aiding vitamin metabolism. Such a light fixture would ideally be placed above the tank on a grate or a piece of egg-crate so that NO GLASS CAN FILTER OUT THE RAYS.
Check the water and make sure all parameters are ideal for the fish. That means you would get quantifiable numbers like:

Indications for this procedure are simple, but they must be noted.

Inverted fish which are sinking or floating are called “Flipovers” and are the subject of this article.
Fish which are inverted more than thirty to forty percent of the time will be suitable candidates for the procedure.
Fish which have stopped eating for more than a week will not be good candidates and have a low survival rate. The best candidate is the fish which is early in the progression of the condition and is still eating!
The fish must be large enough to accomodate implants in the peritoneal space.
If you are unsure about any condition, always check with your local expert or authority.

Fish which have sunk to the bottom are difficult to impossible to buoy up. I have tried more than four to five different buoyant media inside these fish and several processes to re-inflate the air bladder with no/minimal success.

The airsac is a bilobed structure in the dorsal (upper) abdomen of Goldfish which aids their buoyancy and holds them in equillibrium with water. This way, they needn’t “swim up” all the time, but instead, float in the water.
The sac fills via a network of capillaries on its surface. It empties via a “stome” or tube which eructates small amounts of air into the esophagus which can be ‘burped’ or expelled. Sometimes, the sac overinflates and the fish is inverted at the surface. In other cases, the fish may invert and sink to the bottom.
We have attempted many therapies with the air sac in these fish with no real luck. Removal of air from the sac is an extremely short lived improvement, as the sac can refill in as little as twenty four hours.
The basic concept in this procedure is to give the fish more ventral (downward) ballast and help it to swim in an upright posture. We have used aluminum implants, which we hoped would be biologically inert – but the weights eventually worked themselves out through the skin.

We have used quartz implants with greater success, probably because they are NOT inert and the body encapsulates them in scar tissue, which helps them remain in place, in the body.
The anesthesia we are using most with Goldfish is Oil of Cloves. We use the tooth ache remedy which is fully 85% Eugenol. We use one drop per liter, or five drops per gallon.
IMPORTANT: The vial at right is intended for mixing purposes. The

Oil of Cloves is an oil and we put a small amount of water into the vial, add the proper dose of oil of cloves and cap the lid. Shake violently and you’ll see the water turns cloudy with emulsified OOC. Pour the emulsified Oil of Cloves into the water bucket in which the surgical candidate has been placed.
Anesthesia is not for the faint hearted. If unsure of what you’re doing – DON’T!
Watch the fish throughout the procedure. If respirations become rare, we replace the fish in clean water until it becomes more ‘awake’.
EQUIPMENT: Flipover is being remedied with the use of anesthesia and the surgical implantation of quartz stones for ballast. We had at one time experimented with aluminum and stainless steel implants hoping they would be ignored by the body because they were inert. Indeed, our cases did well until the implants migrated out of the body.
The quartz implants are chosen based on an elliptical shape and a smooth surface. They can be autoclaved.

They are inserted through a tiny nick incision made on the outside surface of the body, at the base of the ventral fin.
The scalpel is very sharp and will lacerate a careless handler. If one is unsure about what they’re doing, they should STOP..
We do not introduce the scalpel deeply into the body and do not incise the fish anywhere near the midline. The incision is made to the OUTSIDE of the ventral fin. We make our incision on the side the fish tilts towards. If the fish lists or flips to the left, we incise the fish on the left side so we are sliding the implants into the abdomen to end up on the RIGHT side.
The suture material we are using in Atlanta is a 2-0 Vicryl although almost any suture material would work, including a very fine fishing string which is a monofilament nylon and which would cause no tissue reaction. We use a modified figure eight pattern to appose the edges and results have been marvellous. We are very careful to avoid lacerating internal organs while placing our closing sutures.
Stitches often fall out on their own or can be removed within ten days once the line is tested gently with a blunt object for patency. (Closing)
Disclaimer
The “practice of veterinary medicine” is defined in most states as the rendering of a diagnosis or a treatment to an animal belonging to another party. Interestingly, what you do to your OWN pet does not qualify for this definition. This area would actually be governed by considerations of animal cruelty.

If you do not fully understand or you are not completely comfortable with what you are reading, then the information is not for you. I am available in Atlanta to perform this procedure AT NO CHARGE.

If you attempt to use any of the herein contained information upon your own pet, it is entirely at your own risk. The language of these documents has been carefully reviewed to be complete to the best of my knowledge and FREE of any terminology which would represent a direct prescription or recommendation.
The information in these pages is provided for entertainment and educational purposes only and any other use is entirely un-intended by the author; who accepts no responsibility for the resultant actions of others with regards to the provided information..
Yada yada yada.
NOTE:
I have temporarily discontinued this procedure except for patients which can be hand-carried to my offices in Marietta and picked up by the owner due to the logistical nightmare of shipping.