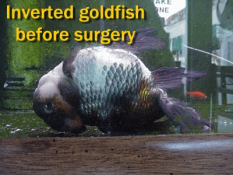 My fish is upside-down/ can’t swim

This is a common problem whereby fish lose their equilibrium and are unable to maintain their position.  This can result in the fish swimming awkwardly, laying upside-down either on the bottom or top of the water, or unable to maintain a horizontal position in the water.  This is often attributed to swim-bladder problems and indeed this is the most common cause of loss of equilibrium.  The swim-bladder is an air-filled sac laying just under the backbone at the top of the abdominal cavity. By inflating / deflating the swim-bladder, the fish can adjust its position in the water and maintain neutral buoyancy.

The swim-bladder can be affected by bacterial or viral diseases. In addition the swim-bladder may malfunction, leading to over or under inflation. Clearly anything which affects the proper functioning of the swim-bladder will also affect the fish’s equilibrium.

However, before diagnosing all equilibrium problems as swim-bladder disease, we should be aware that there are other conditions which can cause buoyancy problems.  Disease in other organs such as kidneys and intestines for example can also cause problems.  This can happen if there is any swelling of the affected organs leading to either a change in organ density or pressure being put on the swim-bladder.  This is often a problem with fancy goldfish whose abdominal cavity is tightly packed.

Treatment is difficult, mainly because it is virtually impossible to diagnose the cause and secondly there are only a few conditions that will respond to treatment.  It is always worth considering a course of antibiotic injections in case a bacterial infection is involved. An attempt should be made to see whether the fish is defecating, in case the problem is being caused by an intestinal blockage.  If this is suspected it is worth either trying to feed the fish a few frozen peas, which act as a laxative, or else try  baths in Epsom salts (70g / litre for 5 minutes) which has the same effect.

If these treatments do not work, there is little else that can be done. There is some work being carried out on exploratory surgery, but there are very few veterinarians undertaking this “cutting edge” procedure. See this one

There are a few reports of fish recovering from balance problems, so it is worth giving the fish some time. One report suggested “wedging” the fish upright between two objects was helpful.  If there is no sign of recovery after 7-10 days, the kindest thing is to euthanase the fish.