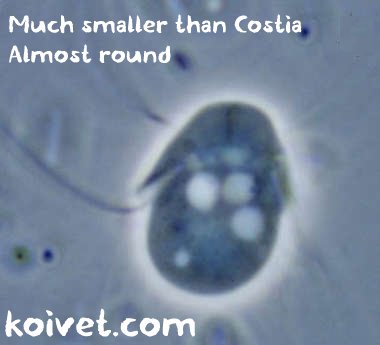 At one time, I might have denied that Hexamita could be a serious dermatological pathogen of Goldfish. Recently, I have seen cases of severe skin and fin erosion that defied explanation until the Hexamita organisms were detected in abundance on the surface of the fish. While their presence could have been incidental, it is persuasive that a pair of treatments using Metronidazole in the water at 500 mg [five hundred milligrams] per ten gallons of water resulted in complete recovery of the fish. It is curious to note that the fish recovered completely from the Hexamita attack, but in the process they demonstrated to most profound example of the melanophore migration that I have ever seen. For more on the melanophore migration, please see the ‘Symptoms’ section and refer to ‘color changes’.

Hexamita is a tiny, flagellated protozoan parasite which was at one time associated with “Hole in the Head” lesions in the mighty Cichlids and Discus of tropical fish fame. Later research suggested that “Hole in the Head” was a multi-factorial condition, which involved inadequate nutrition, inadequate lighting, and poor water quality. Hexamita was downplayed in terms of its aggressiveness. With the advent of a few of these cases, I am filled with a new respect for Hexamita as a serious threat to Koi, tank fish, and Goldfish health.

Microscopically, in a sample of the skin’s mucus, one would observe millions of tiny microorganisms, which are far smaller than even Costia. To identify these pathogens, you would need a competent microscope that was capable of 400+ combined magnification. Indeed, to see the flagella on these organisms would require a 1,000X combined power.

It is clinically relevant that Hexamita may be a chronic, resident threat to aquaria. It is not inappropriate to treat the whole tank to eliminate it, even though the Metronidazole may ‘take it’s toll’ on the beneficial bacteria which reduce nitrogen in the system.

I will opine here that Hexamita is not clinically prevalent [common]. I practiced for eight years before I witnessed this organism functioning as a considerable threat to fish. Before this, I saw certain Cichlids (which were farm raised in Florida) that were wasting away due to a malabsorption in the intestine caused by chronic Hexamita. I’d also recovered Hexamita as a secondary opportunist from “Hole in the Head” lesions in Discus and Oscars. Never had I seen this organism functioning as a primary pathogen and killing fish. Especially Goldfish.