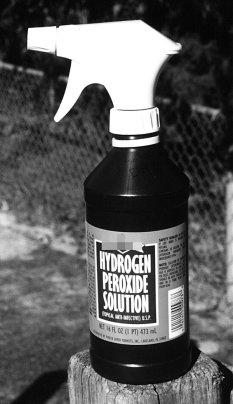 After a potassium permanganate treatment, you can turn the water back to crystal clear. Be careful though, treating with peroxide prevents the successful deployment of Potassium permanganate the following day!
Hydrogen Peroxide is applied the the complete CONCLUSION of a potassium permanganate treatment. The reason is: that you do not want interference with potency of potassium treatment on subsequent days, so, if possible; wait until you are finally DONE with potassium before treating… However, if the water is OPAQUE brown – and you cannot see the fish, you need to decolorize at once and sacrifice the next few days’ treatments.
Regular hydrogen peroxide from the grocery store is used. DOSE: One quart of HYDROGEN PEROXIDE 3% per five THOUSAND gallons of water.
Just so you know, our initial dosing was done at a mammoth level: one CUP per one hundred gallons, and we used like six gallons in a five thousand gallon pond with safe results, BUT, and this is a big but; testing to determine the MINIMUM dose needed brought the effective successful dose down to the 1quart/5000G level.

Decolorization requires up to an hour depending upon how your pond circulates, how much KMnO4 is in there, and how much peroxide you used.. Remember that your potassium will fail the next day or two. If you attempt to overdose and “beat” the previous day’s peroxide, you could kill your fish. So, don’t decolorize with peroxide until you’re REALLY done with the KMnO4 –