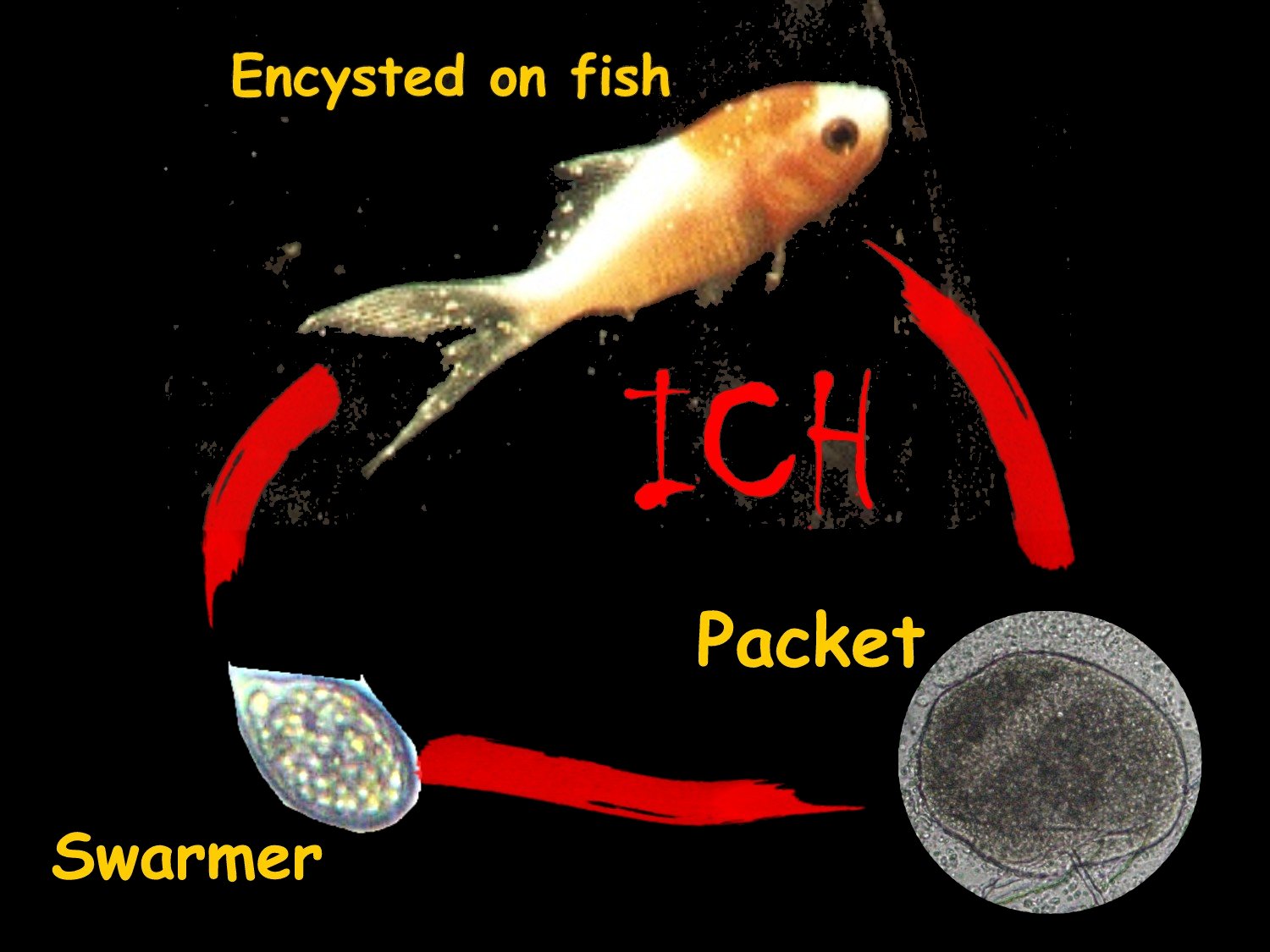 Treated with Mardel Clout or Salt.

Freshwater Ich – Ichthyophthirius multifilis – is a killer of very small fish, and can cause “redskin” disease in the winter regardless of fish size.
Look closely at gill tissue under the microscope to be sure to exclude this pathogen, because it does not usually cause the typical “white spot” syndrome as in other fish. Therefore, it’s often an overlooked diagnosis. Clears easily with salt (0.3%) but sometimes takes four to five days because the epidermal phase (explained in the book) is safe from treatment

If I had to guess, I would guess that every singe hobbyist in the whole world WILL encounter Ich at some time. Usually the meeting occurs early on, as a beginner, before water quality parameters such as Ammonia, Nitrites and ‘The Cycle’ become more familiar, and ‘Quarantine’ is just a high ideal observed by a few pathetic perfectionists.

Freshwater Ich (Ichthyophthirius multifilis) is a ciliated protozoan that encysts under the epidermis of the fish; and, in its encysted condition, causes small white spots all over the fishes body and fins. In some cases, Ich spots may be present, but will not be visible. You may still see them under the scope, or you may see them exclusively on the gills. This is how infected fish may get into a tank without being detected, even if quarantined for a period of time. Asymptomatic carriers can sustain a population of Ich in a tank or pond for an indefinite period. Sometimes an owner will purchase a new fish who, being immunologically naive to Ich, will contract the condition immediately upon introduction to an ‘endemic’ (already infected but asymptomatic) group of fish. If a fish contracts Ich, and survives without treatment, they have shown strong immunity to re-infection, indicating that the potential for a vaccine exists, and is being worked on at University of Georgia and other institutions. It would have astonishing impac on the Catfish industry if it could be achieved.

Ich rapidly kills smaller tropicals and goldfish, while often sparing the larger varieties (fish such as Oscars and Koi). Damage to the gills is the primary way it kills, but damage to the skin with secondary bacterial infection may also figure prominently.
Its life cycle is roughly 2-5 days, but can be longer (5+ weeks!) if the water is cool, much shorter if the water is warmer. There is the old rumor that warm water eradicates it. This is substantially true when temperatures exceed 85 degrees, however; there are strains coming out of Florida and detailed by researchers at University of Florida that can survive and thrive up to NINETY degrees or more! Recall that many of our bread and butter species of tropicals come from Florida, and so may harbor this heat tolerant strain.

The parasite has a phase that encysts in the epidermis of the fish as previously stated (called a theront). It matures under the skin and finally drops off, falling to the bottom (becoming a trophont) to divide into numerous (hundreds) of tiny swarmers (tomites) that actively seek out a host on which to encyst and renew the cycle of infection. Because an important phase of its life cycle occurs on the bottom of the aquarium, it is for this reason that you can help limit infections with water changes made by siphoning the gravel, removing those dividing Ich packets.

Interestingly, some research at Oklahoma has revealed a strain of Ich that does not have to leave the fish and whose Ich packet (trophozoite) remains under the epidermis (safe from medications) and the tomites swarm out under the epidermis. The lesions look much like Carp Pox lesions, being large, flattened, and waxy looking. This parasite is harder to clear because it is the free swimming tomite that we can kill with medicaments.

Prevention is attended at the wholesale level by the maintenance of a 0.3% salt solution which crenates (kills) the emerging tomites. We do not recommend that you as a hobbyist maintain this salt level all the time because live plants can be killed by this, and all species of fish are NOT universally tolerant of this. Still, many have found that salt is a very effective annihilator of Ich infections if normal precautions are observed.
There are numerous reasons to reach for salt, first, for Ich.

1) It does not harm the majority of fish species.
2) It does not push sick fish ‘over the edge.’
3) It eliminates, QUICKLY, most of the serious pathogens of tropicals.
4) It does not get bound out of the system by organics or sunlight.
5) It does not pose a health risk to humans contacting it.
6) It is CHEAP, CHEAP, CHEAP.
7) It WON’T harm your filter if administered in divided doses.

To recap my points, here’s the nuts and bolts of Salting Ich..