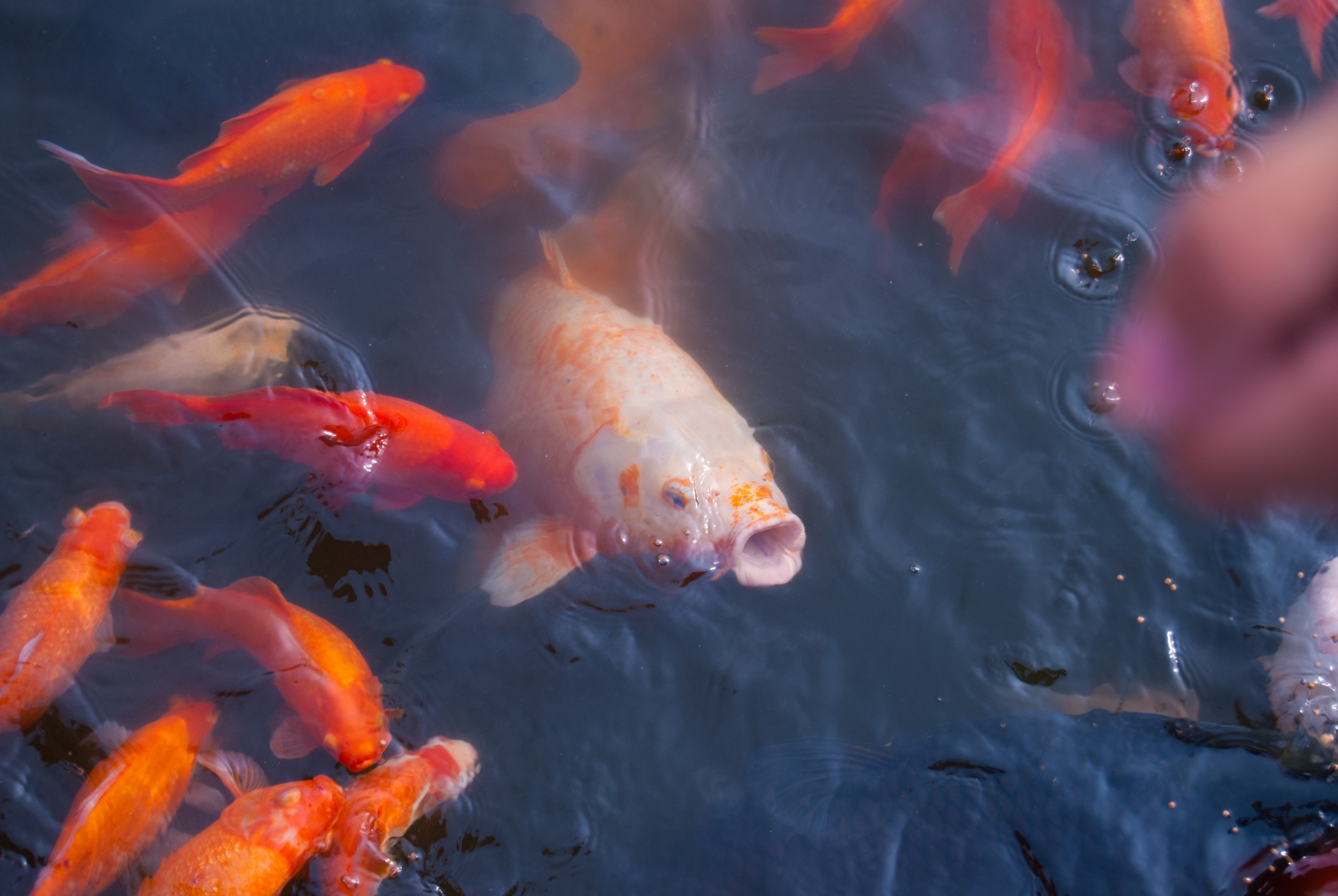 Well, what discussion of Koi Nutrition would be complete unless we talked about the Koi’s more jocular habits of eating fry, frogs and each other? More fantastic than fact, here are some things you might not know.

In the Springtime, there’s these little frogs called Spring peepers. You can here them in low areas of your yard or the woods, living in puddles. In the cold months of Spring they spawn and lay strands of eggs. And sometimes, they get in your pond, and a big Koi catches one. Or, like at my house, all the Koi catch one. And so you get up in the morning and all your Koi have a pair of frog legs sticking out of their mouths and they like the taste pretty good, but they can’t work it down. So they swim around with the frogs in their mouths like pacifiers. Some of the largest fish can get the frogs down, some eventually spit them out and you have to net them out or they will decay and make a mess.

Koi in tanks with Oscars

I saw two different situations of similar type. A large fish tank with the unlikely tank mates of Oscar Cichlids *and* Koi. The Koi were initially brought home as live food for the Oscars instead of Goldfish or guppies. However, the Koi eluded the Oscars and, as Americans always pull for the underdog, the Koi were allowed to remain in the tank with the Oscars. But the gentlemen keeping the Oscars were only actually “keeping” the Oscars (Good luck, Koi!) so the food being put in the tank was suited for the Oscars: either worms or little fish. To survive, the Koi became very effective and ferocious guppy and goldfish eaters. Habituate or starve. I’ve always said that.

Koi fry and the Cannibals

Finally, you should know this about baby Koi. A momma Koi will lay many tens of thousands of eggs per spawn. And her babies will be very numerous. And these fry mature at differing rates. The brown solid-colored babies will mature faster than the bright solid-colored fish and these babies will mature more quickly than any two or three colored fish. So it happens that often you see several much-larger baby fish in a spawn swimming about with a tiny sibling tail in its mouth. These cannibals eat prodigiously and the more they eat the bigger they get and the faster they get there. So breeders know to remove these cannibals. If you don’t you will have a nice collection of Ogons and no multicolored fish in a spawn. So Koi can be cannibalistic when they’re fry.

Later in life, it would be exceedingly rare to see a large Koi eat a small one.