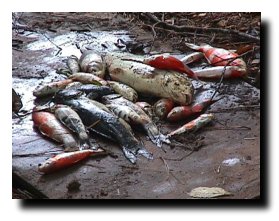 Koi are generally hardy fish. They’re descended from the common carp and are tough, essentially omnivorous fish with the ability to withstand a range of living conditions.
As an ornamental specimen, the Koi is beautiful, and sought after for it’s highly strained color varieties.
Koi health and disease is essentially a balancing act or “equilibrium” created between stocking density, water-and-environmental conditions, parasites, and the fish itself.
It was once said that “if you take care of the environment, the fish will take care of themselves”. This was true until some of these viruses started showing up with increasing regularity.

Introduction to the Viruses:
There are two known viruses of importance to Koi. There are other viruses, but these are important from the perspective that they can quickly kill the fish and are both highly contagious.

These viruses are similar and dissimilar. Some of their differences and similarities are important.

SVC Recently Discovered? No. This virus was described in the literature more than forty years ago.

KHV Recently Discovered? No. KHV was reported in Japan fully ten years before it’s first outbreak or discovery in Israel. The earliest documentation I can find is from the 1980’s

Reported “absence” of SVC from American waters may have been due to a lack of testing. I personally (ELJ) think that SVC is an endemic, and highly morbid contributor to many of the Springtime die-offs and illnesses we’ve seen every year for the past two decades.
The problem is that testing for SVC can result in quarantine or worse. Retailers are unlikely to “step up to the plate” and endeavor to discover this virus and limit its distribution.

This KHV virus seems to be infecting “groups” of exposed fish which go on to infect others, or simply die off en masse. It’s own virulence (aggressiveness) is probably limiting it’s morbidity.

Lesions with these viruses:

SVC: Pale white lesions may result due to the co-infection by bacteria. Fish may develop a pink or red color in the skin as infection progresses.

KHV:  Pale white lesions may appear in the gills of affected fish. Excess slime, especially on the head and nape of the fish seems common. Body-color of the fish may become blotchy and the internal organs may be damaged or even liquefied.

SVC: People don’t want to submit for, nor do some labs want to test for; SVC because of the maelstrom it causes. Since it’s a reportable disease, a positive test results in the slaughter of all affected fish. For a business, that’s closure. Thus, it’s a diagnostic challenge.

SVC: Can be cultured, there is a reverse PCR test for this virus.

SVC: This morbid virus is reportable by law.

The KHV highly virulent virus is ALSO legally reportable but is as yet unregulated.

Spring Viremia:
The real issues concerning SVC are it’s status as a reportable virus. It’s very possible that many breeder and wholesale facilities (as well as many residential ponds) have fish which harbor this virus. Testing is currently possible, but is not being undertaken on a widespread basis, because of the cost, the lack of centralized and unified regulation, and a reluctance of civilians, (and researchers) to open that “can of worms”. Retailers concerned that their stocks could harbor this virus would put themselves out of business by soliciting SVC testing by a laboratory and receiving a positive result *.
Fortunately, SVC isn’t a terribly efficient killer of fish and could be considered ‘mild’ at least compared to KHV. Well-cared-for fish can often survive the virus not unlike the way healthy people survive the Influenza virus, and optimally housed fish may not even break out with signs of infection.

Schaperclaus showed that fish infected with SVC *only* perished if coinfected with Aeromonas or other damaging bacteria. That fish on antibiotics were not killed.

I for one do not spend much time worrying about the SVC condition because I would neither subject my customers to diagnosis (and potential persecution caused by an SVC diagnosis), nor would it change my treatment, which is antimicrobial support “past” the ravages of the virus . I am, as a healthcare provider to fish, almost alone with this opinion *.

The real issues concerning KHV is it’s predilection for a narrow temperature range for infection, and it’s ability to hide when it’s outside those temperatures in asymptomatic (not sick) fish. If you grind up a healthy-looking fish which you think might have or be carrying KHV looking for virus, you can easily miss the diagnosis unless the fish is actually viremic. When a fish is symptomatic and sick with a KHV infection, the virus can usually be cultured into certain cell lines, detected by enzyme linked PCR tests, or even detected by unique nucleic acids in it’s structure.
What it boils down to is this:
If you’re considering buying some nice new fish this Spring, how do you know the fish isn’t just sitting there; ready to explode with KHV as soon as it hits seventy degrees Fahrenheit?
You don’t have any security unless the fish has been through the following cycle of cold-then-warm, which are believed to be important triggering events for KHV infections:

Stress and cold water and then warming to the viruses ideal range in the seventies (oF) allowing virus to replicate and damage the fish.
So, a fish which has previously endured, and survived, a temperate (North American) climate change from winter to summer could be regarded as the safest fish to buy… but does not rule out that the fish could be carrying the KHV virus. Some dealers are artificially inducing these cold-then-warm cyclic changes in their recent imports (The “cold” part, unnecessarily, all it needs is 74 oF) to try and bring these cases out of the woodwork before sale by chilling and then warming the fish after importation, creating a “mini” cycle.
Testing for KHV can prove the fish to be without the virus and “not currently infected” but since the carrier state is a relative “unknown” at the present time, there is little security in a negative KHV test in a healthy fish. A negative KHV test in sick fish could be considered much more reliable as most fish with active infections have virus which is capable of detection by available means.
Quarantine will become a necessity, not an ideal. This quarantine could arguably be 8-12 months to allow a complete “cold-warm-cold” cycle in order to reveal occult KHV or SVC infections.
An actual case:

The following was used on one of several cases of KHV which broke out in the Fall of 2002. The fish were being heated despite the onset of wintertime temperatures outside, to support the fight against what appeared to be a severe bacterial infection. Then an Arkansas laboratory indicated it was KHV. We had stopped the losses initially with Tricide Neo but the losses resumed a week after the Tricide dipping which made us even more suspicious that we were dealing with a virus. (In quotes, my customer communication)

“Your losses have not been on par with the others, most folks lose 70-90% of their fish in a week or two. This is not a cause for optimism. It may be because you used the Tricide-Neo it could also be because temps were falling as they broke….
However, now most of the fish *are* symptomatic and as the Arkansas specialist indicated, you COULD let the heat off and the virus COULD (should?) go dormant.

That’s what happened. We let the heat off, the fish sailed down below seventy and losses were suspended.

In the Spring, here’s the possibility: Since most of the fish are showing signs, it’s safe to say they are “viremic”. If they are chilled ***RIGHT NOW*** (today!) – could they not chill down, stop the virus / viremia / replication, and with warming in the Spring, perhaps mount an immune response???

Yes, it’s possible. Israeli researchers showed that they could infect Koi with KHV and then break the virus with heat. During the infection, the fish would spike a feeble immune response. So they would reinfect the fish, let them become clinically ill and then break the virus again with heat. Repeated that a third time and then the fish had immunity to the virus and could not be reinfected. The key was they had to survive with the virus ENOUGH days to mount a response. And a naturally occurring infection kills too fast. So it has to be chopped up by heat hiatus.

So, here’s my recommendations for Winter KHV Outbreaks:
1) STOP HEATING NOW if the fish have KHV.
2) STOP the water falls; to prevent the phenomena of “supercooling” from chilling them too fast.
3) Maintain mid-water circulation to maintain aeration and to de-gas the pond.
4) Remove dead as they show up.

5) In the Spring – when the Arkansas specialist , you, and I have talked, we should “accelerate” the heating process. *NOT* letting them warm up slowly, naturally.
We should do a sort of: “On your mark, get set, go!” and move them as quickly and safely as possible through the warming process, for example, when water naturally hits 45-47 oF we could suddenly take them “5-degrees-per-day” to a whopping, most “KHV-unfriendly” 80df six day warm up. Window in the seventies: TWO days.

Crazy? Maybe. Kill all your fish? Not like the virus probably would if water temperatures were suspended in the seventies..
Finally, you *do* see the problem with complete disinfection, “depop-repop” plans. If you sacrifice all your remaining fish, to get new healthy ones; what on earth will prevent you from restocking with 49 healthy fish and ONE MORE KHV carrier? Nothing.

So I am not really in favor of a wholesale depopulation at this time.