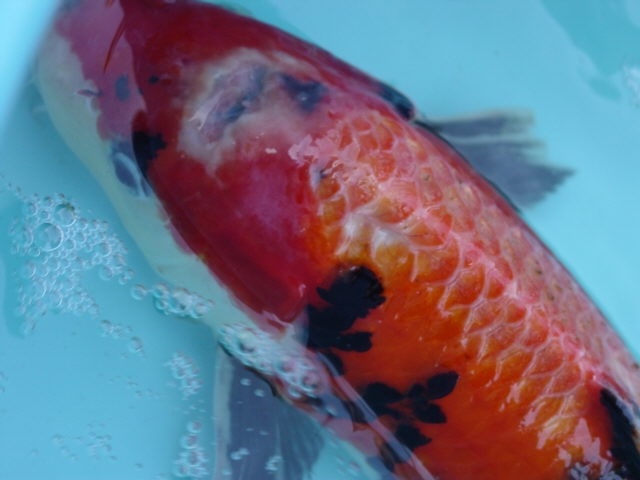 June 21, 2003 – Our annual club auction. Thank goodness I knew what I had. Started using KoiZyme twice a week instead of once a week. Ordered antibiotic food from Pond RX. Lost 9th fish.
June 24, 2003 – Started on antibiotic food for 11 days, but they ate very little, for 3 weeks. Four required further treatment with Baytril, but all remaining fish survived (29 out of 38 + 2 small 6”fish & kumonryo) – Heated to 83 degrees for 11 days, starting the 19th.

Now Aug.12, 2003 – 9 weeks after outbreak, all are eating well and acting normal. Several lost some color and several still have sunken eyes. No more infections.
I should mention that I did a scraping of two fish 7 or 10 days before introducing the new fish just to be cautious – I didn’t see any parasites. However, the very first indications I got of the problem was the obvious presence of costia and the scraping showed them to be heavily infested. This was before any “disease-like” symptoms, but 16 days after I introduced the KHV fish.
June 17 (24 days after introducing fish and 18 days after it appeared ill) was when a friend called me and told me about three other ponds already wiped out from the same purchases at Louisville. It really appears as if treating for costia, either before or during the heating process might make a big difference in survival rates. My first mortality, other than the initially infected fish was not until this date. And Proform C does seem ideal as it is so quick.
Linda: Something I really want to know and forgot to ask, do the sunken eyes come back to normal?
Doc: Answer: Yes, they do as the fish recover their strength. heat seems to make a big difference in how fast this recovery is.
Linda Kinney