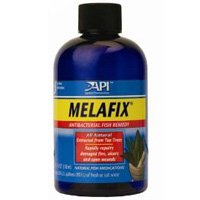 A lot of promises were made about MelaFix / PimaFix when they came out. Including antibacterial properties. At one point they were considered “anti parasitic” however in my testing nothing of this was true but that does not mean these oil tree extracts are useless. Far from it.

It’s been years since this was written up, and field experiences have revealed the following:
Melafix remains effective in many of the “garden variety” superficial bacterial ulcers and sores wherein the fish are not “sick” but have scuffs and scrapes in the skin.

The foaming of the product is initially alarming to most people.
A lot of people overdose with this stuff, causing other trouble. Don’t do that.
Melafix is INEFFECTIVE against deep or systemic infections or infections wherein the fish are sick and or not eating..
No antibacterial treatment is effective against bacterial infections or sores UNLESS issues with temperature, water quality, crowding, feeding and background pollution have been remedied.

Melafix is a patented 1% mixture of CAS Melaleuca (Tea Tree Oil) which is used to enhance healing in fish.
Melafix is promoted to have antibacterial properties but our research has shown this is not the case. We treated an inhabited system for five consecutive days and then ran CFU (colony forming unit) tests on the water and found a typical population of Aeromonas hydrophila/caviae, and Citrobacter freundii, as well as Serratia spp.
Melafix is promoted NOT to damage the function of the biological filter and this was verified. MelaFix has no effect on filtration. We treated a cycled inhabited system and checked daily or derangements in nitrogen reduction and found none during our application period.
MelaFix has no effect on pH. We verified this daily along with other tests of water quality, and everything remained in the ideal ranges.

We have treated numerous species of fish in Atlanta and have found MelaFIx to be nontoxic to all species, including freshwater sting rays.

Koi With Wounds in Our Testing

We treated daily, using NO OTHER ADJUVANTS or other therapies. The wound was never dressed topically and the fish was never injected. No water changes were done. No SALT was applied or present in test tank water. Within three days, healing was impressive.

I will probably add the recommendation of MelaFix to all my cases where a water treatment is practicable and where healing is urgently needed.

Consider MelaFix most favorably in the following conditions:

My thanks to Aquarium Pharmaceuticals for a 1% and a 5% solutions for testing purposes. Thank you for providing quantities sufficient for replications in at least ten different situations and cases.