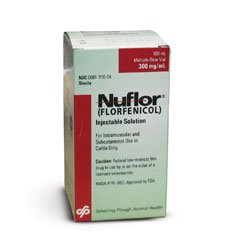 Schering’s “NuFlor” injectable has been used in Europe on Salmonid fishes for a while now. I was introduced to it by my Butler Co. representative in small animal practice. I noticed the name of it: Florfenicol and realized it might be a powerful cousin to Chloramphenicol, which has given us fits in terms of reconstitution, storage, and half life.
NuFlor has since been incorporated into numerous koi cases both here in my clinic, but also in Oklahoma and out on the West Coast, with good success.
Is it a cure all wonder drug? Nope. Read on…

Hello Dr. Eric,
My name is James V. and I am a koi & gold fish farmer. Recently we encountered great problems with Aeromonas ulcers /lesions on our koi and after extensive tests by both Dr. Chris Fouche and Dr. Anna Mouton (Onderstepoort Vet. services) we found that the strain of aearomonas we had (Aeromonas hydrophila ssp.) was immune to most treatments used commonly. Dr. Chris Fouche then reccommended Nuflor as you stippulated in your book “koi health and Disease”. We injected about 860 koi with Nuflor and after only 4 weeks we had 95%of them cured completely ! I just wanted to give some feedback on our experience with the drug for others to see there is always hope, and thank for your contribution too ! Regards James V.
The market is full of commentaries on how Chloramphenicol is the perfect drug. It’s relatively non toxic, it’s safe for even the smallest fish, and it’s readily available for use in non food fish. However, it is not very stable, losing potency within 7 days of reconstitution.
Others tout Baytril [enrofloxacin] as the best antibiotic because it works very well, and perhaps best of all, it usually carries a year’s shelf life and is stored at room temperature. Dr. Greg Lewbart at NC State Univ.at Raleigh has published alot on it, including a study of it’s efficacy in Pacu. I have preferred it mostly in practice for all the above reasons.
Azactam is currently the reigning king of the injectables but particularly among those who have never used it. Folks who have used the drug in their koi agree that Azactam is very good, and gives excellent results when applied to bacterial pathogens which are sensitive to it. But is has some of the same drawbacks as Chloramphenicol. It has a short storage interval, and requires refrigeration. It is also generally the hardest drug to get, of the above three.

NuFlor is produced by Schering Co. in large [100ml] tanks. It’s an oil based preparation labelled for use in Cattle only.
I have been injecting koi with this drug via the intra muscular & intraperitoneal route. The drug is reported to be rather irritating to tissues and so, despite my individual successes with it intraperitoneally, I advise you to remain with IM injection until I have evaluated actual peritoneal tissue responses in test fish given IP injections. See note at conclusion, below. There are two intramuscular routes available and they are illustrated photographically on Koi in my new book, “Koi Health & Disease”.
I have also injected the compound into Koi via the intraperitoneal route, and to my surprise, have had no losses that way.
I have noticed that the best response is had when Koi are injected early in the progression of the bacterial infection. If the Ulcers are small, or the mouth is incompletely damaged, a single shot of Nuflor will resolve a pleasingly high number of cases. I theorize that because the product is oil based, it is more slowly absorbed and therefore it fails to intercept cases which are “on the way out”. However; the oil based nature [and extended release] of the drug makes it ideal for conditions wherein repeated injections might be laborious or impractical.

Nuflor has been tested by Gary Cryer at Koi of Oklahoma and he is impressed with the results in general. His results are similar to mine in that he noted that fish that were on their way out did not recover, whereas the fish with more manageable lesions went ahead and recovered nicely. Gary will be testing some newer ideas for me at his location, including an immune stimulant and some other injectibles that hold alot of promise. Keep your eye on my site and visit his for more information from time to time.
Several breeders and importers in California are also enthusiastic about NuFlor’s extended storage time, and the concept of a single injection resulting in complete recovery.

We are using a larger needle to inject the drug. Nuflor is oil based and therefore is drawn up into a syringe with a 20 guage needle. Injecting the drug with a 22 guage or smaller usually results in an extended injection time, and more potential for damage to the fish with the struggle. I am injecting IM & IP with a 20 guage needle.

Even though Nuflor is three times more potent that Chloramphenicol (300mg/ml versus Chloro’s 100mg/ml) I am using the old Chloramphenicol dosing chart. The idea is that since the compound is more slowly absorbed, and released more slowly, then there should be an additional amount to provide quick loading and long term availability. Studies to trace the pharmacology of this drug would cost over $10,000 and are not entered into lightly by institutions.

Use of NuFlor 300mg/ml injection is detailed in chart below

I have had a single fish develop a visible complication after injection. A single fish developed a blisterlike sore over the site of injection in the muscle, which will probably leave a noticeable scar. I have injected more than three dozen fish, some as small as 5 inches, with no untoward reaction or lesions.

I am preparing to perform some trials with NuFlor via the IP route, and grossly observe the peritoneums/abdomens of these fish one and two weeks later to establish or discount the formation of untoward adhesions or inflammation. Please stay tuned to www.koivet.com for more information.
Update: 3/15/98
Since we started using it, we’ve put alot of Nuflor into use. It’s bruising some fish injected IM but it’s been found to be very safe injected in the peritoneum. The bruising in the muscle is temporary and lasts three weeks. The efficacy of Nuflor on ulcer disease is very good.

NuFlor is available from your local fish-friendly veterinarian, if you can find one. Tell them about this site, so they can become useful to you and to your fish. If you are unable to obtain a medication you need, send me an email and I will provide you with the needed information on how to obtain it.
Dosing Nuflor 300mg/ml – INTRA MUSCULAR 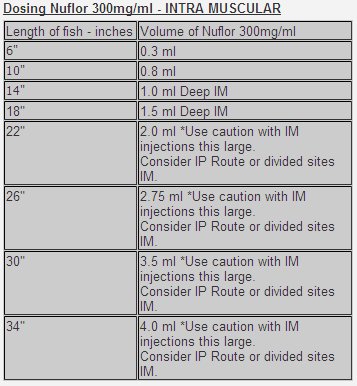 “Okie Dokey. The above article is pretty old. Lots of people have been injecting NuFlor into the muscle and many more still have been using it IP, or into the belly (intra peritoneally) without harm.

I am reluctant to use it on large Kohaku’s because of a rare reaction in which the fish will turn bright red, and some of them will die. We do not know if it’s a cellulitis or a sensitivity to sunlight. It has only happened in red and white fish – and some of the Black and white (shiro) variety. But I have had about three fish among the hundreds injected, to turn red and nearly die after Nuflor injection by the IM route.” ~ Doc Johnson