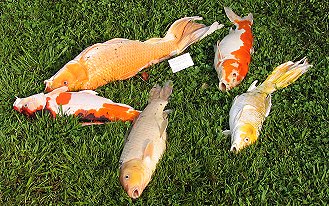 Abstract Format:
pH is just a measurement
It needs to be higher than seven
A high pH doesn’t really matter unless there’s ammonia in the water
pH is supported by carbonates
Baking soda is a short term carbonate source
Failure to support carbonates will result in an eventual “crash”
I am sure that for most people, “pH” is a pretty normal term, maybe even a household word. For those who don’t understand its importance, pH is a measurement of free hydrogen ions expressed in a ratio or logarithm, called the Michalis-Menten equation.
Here’s how that ratio works:
When you have a lot of hydrogen ions in the water (such as are liberated by the reduction of Ammonia) then the pH drops into the ‘acid’ range below 7.0
When you have very few hydrogen ions in water, the pH climbs into the high, alkaline range, above seven but usually more like 8.0-9.0. A high pH is harmless to the fish unless the pH potentiates a toxin like ammonia if accumulated in the system.
What else drops the pH?
When carbon dioxide is made in the water, by plants, it converts into carbonic ACID and this brings down the pH into the acid range. So there are a variety of forces pulling and pushing pH. Almost all biological effects are pulling the pH down.
So what, really?
Hey, all that matters about pH is that it’s HIGHER than seven-point-oh for Koi and goldfish.
Now, before you go thinking the pH moves naturally “all over the place” on various chemical whims, it’s not always like that. It’s important that you understand that there’s a ‘federal reserve’ system which checks-and-balances the pH. It’s ‘Carbonates”
Carbonates come naturally from limestone, which is made of Calcium Carbonate, and Magnesium carbonate. Carbonates can also come naturally from shell, like Oyster shell, which is made from Calcum and magnesium carbonate. If you have decorative rocks and cement at the ponds edge, and your pond water can bathe these rocks and grouting, you should have NO problems with pH or carbonate support of same. This is true if you have a nice waterfall bathing rocks and grout.
Less naturally, carbonates may come (through man made intervention) from chemical additions such as Baking Soda (unscented Arm&Hammer) works in my pond. Baking Soda is Sodum BiCarbonate. When it gets in water, Baking Soda dissolves and renders a harmless sodium and then the pH-stabilizing carbonates.
Baking Soda is a naturally short-lived pH buffer (stabilizer) but despite it’s short life, it works pretty well.
The carbonate molecule can give or take free Hydrogen ions. This means that when there is a surplus of Hydrogen, the carbonate-reserves can capture and hold the excess, preventing the pH from dropping. When the hydrogen ions become scarce, the carbonate molecules can liberate hydrogen ions to maintain a smooth pH as well.
So carbonates are there for us, stabilizing pH.
But if carbonates are exhausted, used up, or lacking in the water, the forces which drag pH down such as:
carbon dioxide formation by fish, algae and plants,
Hydrogen ions liberation from ammonia reduction, etc.
…will drag down the pH until fish fatalities result. So, carbonates are all that stands between you and the loss of your fish.
Symptoms of a low pH:

The “pH Crash” can occur very rapidly once the carbonates are finally exhausted in a system. In warm water, green water (lots of algae or plants) or heavily stocked tanks and ponds, you will find pH crashes can achieve 100%-mortality status very very quickly.
My fish, once thriving in 6,000 gallons and green water at about seventy five degrees Fahrenheit were all killed while I was away for scarcely more than a day.
The carbonates were exhausted because the pond is 100% liner and no rock or ornamentation in contact with the water. Carbonate support was purely man made and I had been neglectful in it’s application and I had not tested the carbonate level (total alkalinity) in weeks. The pond was warm, green and crowded. In scarcely more than 36 hours all the fish died and sank to the bottom.
I was not there to see the piping or surface breathing they do when the pH falls. Sunday morning, April 20th I woke to find the first few floaters, drained the pond to fine the entirety of my collection dead.
Take-home concepts:
Always, regularly, add a pH buffer OR better still always check your carbonate levels (total alkalinity test) weekly to make sure there are sufficient reserves. (This would be at LEAST 40 ppm TA)
Always have some Baking Soda on hand for emergencies, it’s the fastest way to raise the pH.
When crashed, the pH should be raised as QUICKLY as possible. Increased aeration and water circulation helps stabilize a pH crashed environment as well.