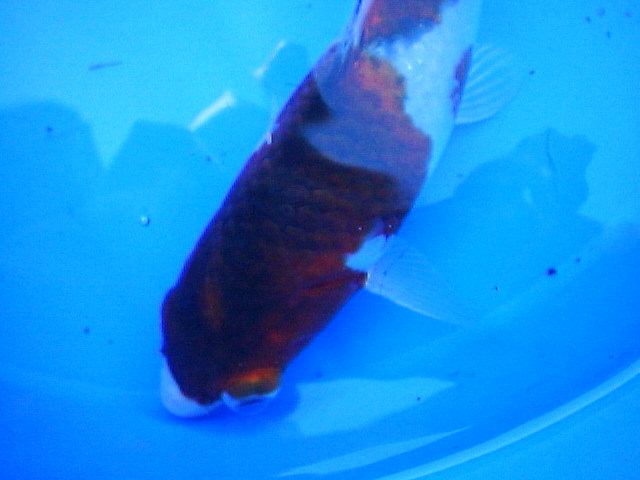 “It was 5 inches and had a small mark on its side which I considered a possible problem. I paid for the fish and asked Dave Rice the dealer @ Worthing Koi to keep it in his pond for a couple of weeks. At this time there were no signs of any eye problems. I had a call 2 weeks later to tell me the side mark was gone, but one eye had come up. The fish was overwintered @20c and has been in the dealer’s main pond ever since. It is now 10 inches. The eye appears to have full sight and is fully motile, the fish feeds well.”
Graphic courtesy Dave R. at Worthing Koi, Thanks!

Popeye, or exophthalmia is the condition of an eye wherein it protrudes from its normal position in a socket.
For years in the literature, the causes of exophthalmia were few, and almost all literature surveyed suggested it was a mycobacterial infection, or Tuberculosis forming an abscess or granuloma behind the eye.
In this case, that may very well be true, and you should be aware that there are very few drugs effective against piscine tuberculosis, there are even fewer that can access the space behind the eye. In humans,m these infections are still hard to treat becasue the space behind the eye is isolated from real good vascular supply. As well, tuberculosis, particularly the one for fish, is transmissable to humans through open sores. I’m not saying it’s always TB, but it could be, so avoid contact.
Other causes of pop eye include viral and other causes of inflammation to the Choroid or vessels leading to the eyeball itself, and trauma ranks high in this group. If the eye does not get picked OFF when it protrudes like this, it is entirely possible that it could actually pull back in as the swelling behind the eye reduces.
In some cases, the eye may heal and remain sighted, but the swelling may remain indefinitely. Certain conditions may cause bleeding inside the eye, occlusion of the drainage mechanisms of the eye and result in a permanent buphthalmos (large eye). Often, these eyes may move in the socket but are sightless because glaucomatous pressure on the retina quickly kills the rods and cones responsible for sight.
Let me say a word or two more about bacterial or TB (tuberculoid) pop eye. It spreads slowly, and gets its foothold through stress. Be sure water quality is optimal, and that the diet and temperature are perfect for the chosen species you maintain. You can try antibiotics with this, even injected ones if
the fish warrants it, but I really suggest you not get your hopes up.

+ “Popeye in one eye carries a much better prognosis than in both eyes. In one eye it remains more probable that the cause was traumatic and those are
reversible.” ~ Doc Johnson