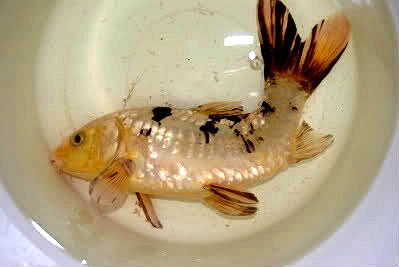 The four most common causes are:

“Usually shows up two weeks after the electrical discharge but in my mind, it was settled, the fish had been “hit” by stray voltage. From lightning or a surge through an adjacent appliance….

For a fish of her size, to have lesions like that, at that stage in life, there would only be two possible causes:

1. I’ve seen this in fish with scoliosis after a history of serious, bloodstream infections with Aeromonas / Pseudomonas – and I THEORIZE that these fish SOMETIMES get “microabscesses” in the spinal cord, *or* an Aeromonas osteomyelitis – of the spine – and so I’ve seen (as a postulated result) a rash of broken backs among an admittedly low percentage of fish (< 10%) I know to have bacterial infections.

A lightning strike NEAR the pond can generate quite a jolt of electricity in the ground, and this dissipates RAPIDLY as the discharge goes into “ground” via heat, etc. But if close enough to the pond, and considering fish “jerk” in mere millivolts and milliamps – you can find these lightning strike discharges (of “gigajoules” my friend) reaching the pond in “still high enough” voltages to jerk the backs of some fish asunder – AND – folks are surprised to find, sometimes ONLY one or more fish affected (not all) which is mystifying – but common. The reasoning is purely “adjacency” to the discharge – the nearer fish with greater body power snapping their own spines more predictably than a fish further away and with less mass to snap the spine.”