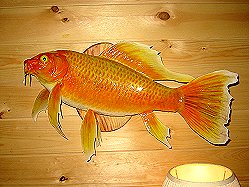 Koi can be taxidermied if you really want. I had this Koi, a big butterfly Koi from Blueridge Fish Hatchery for years. She was a big favorite of  mine because her orange was metallic and the lines between her scales made a fishnet of gold. And of course the long fins. And then too, she had a personality.

When she died, I put her in the freezer for a long time and eventually found Lynn Ward who could do taxidermy.

He said that the fins would be challenging because they don’t dry very well, tending to curl. Also, the “skin” (epidermis) on the scales tends to curl up, too when the fish is dried. But he dried Oro very slowly and spent the time to keep the tail flat and the scales from curling. He gave her glass eyes. They use putty to hold the eyes into the orbits, then air brush that to blend it in. He came from a picture and painted her amazingly.

She held up VERY VERY well in a climate controlled room with average humidity control. For years. Then I lost my place in the market correction of 2008 and she went with all my belongings…somewhere. I guess she’s on someone’s wall somewhere?