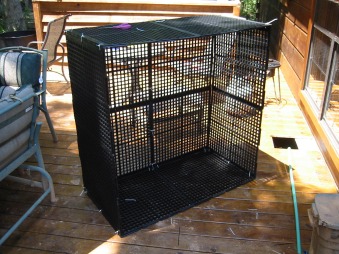 People with veggie filters have been out there for a long, long time. I’ve been over here using UV’s and algae for Nitrate control and green water control.

One of the reasons I resisted a veggie filter was the hydraulics of the situation which did not lend themselves to this until I went above ground in a pond of 4000 gallons. Then it became possible and practical to gravity feed a veggie filter. The other thing was the root systems of hyacinths can “cash in” a pump in a hurry if the volute allows the torn up roots to get into the impeller. What could you use other than a Hyacinth? Anything grow as fast? Yes…
Anyway, I found this cool, rapid growing duckweed/plant, and so I finally pulled my head from it’s overworked daily routine and decided that I would build a veggie filter. Just to see if I could accomplish naturally what we’ve usedchemicals and UV for for so long.
I am using it in conjunction with the bio functions of my bead filter.
The “plant” is nothing but a kind of Duck weed, except it’s very lacey looking. I was amazed by its growth rate and suspected it might do well as a shade plant which would assimilate lots of carbon and nitrogen.
Tom brought me about a tennis ball can full from one of his vats and I put it in the secondary, veggie pond. (600 gallons) and in three days the weed had doubled its bio-mass to cover the whole surface and the main systems’ water went “clear” (Still green tinted) to the bottom.
I had decided to quit the UV running, just for this experiment, and we started with the water running pure green. 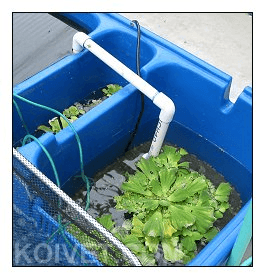 I think it’s nothing short of amazing, but the people with veggie filters will say “Duhhhhhhh, what have we been saying all this time????”
UV’s’re great for all kinds of things including clearing green water. I just messed around with this idea, “veggie filters”, perhaps on behalf of folks who can’t afford a big UV, and found it to be very effective.
Live and learn.
Doc Johnson

From Bonnie: “Converted? Hehehehe!
BTW the lacey looking plant that looks like duck weed is Fairy Moss or Azolla. It grows as fast as algae and will clear the water fast! The added benefit is fish do not eat Fairy Moss so it can multiply real fast in a pond. When it over populates the pond, you can take a net and dip out the excess. We use it to mulch our tomato plants. Duckweed grows as fast as Fairy Moss but the fish love to eat it. I feed my Koi duckweed on a regular basis.
Bonnie”