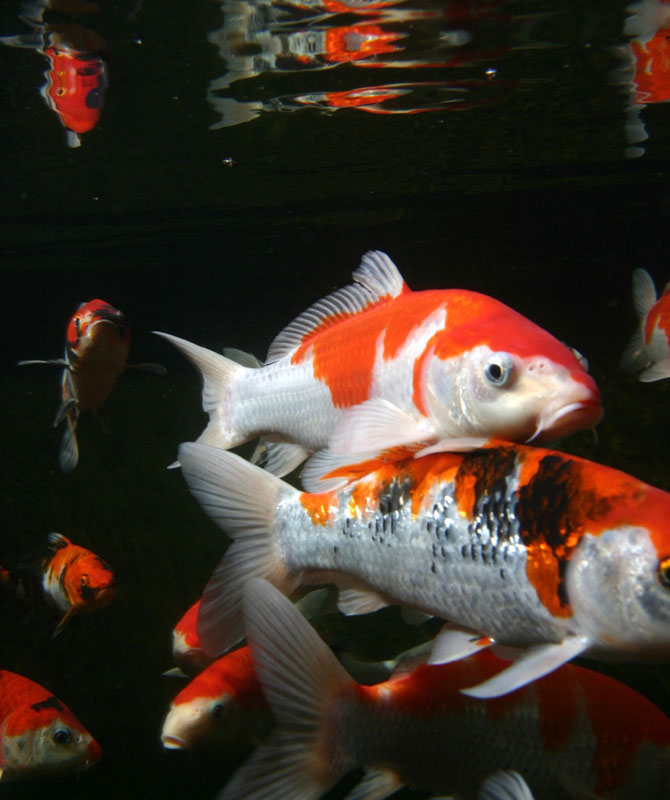 Goldfish occur in numerous varieties, here are some of the most common and most desirable.
Comets
“Comet” goldfish are common, and rather plain in appearance. Generally, it is accepted that they are a plain orange goldfish with a short or a long tail, which is not doubled or fanned. When you see some Goldfish which cost a dollar or two, you’re probably looking at Comets. The best thing about Comets is that they are extremely durable. They are also prolific breeders and you will not have these for very long before the pond becomes crowded with their offspring. Usually, the bulk of their offspring are plain brown. Comet goldfish will interfere with the breeding of Koi and other fish because they love to eat the eggs and fry (babies)

Fantails cost a little more because they are more highly selected and appear a little more “exotic” than the plain old Comet. You can see when you look at them from above that their tails are doubled, or fanned. Usually, the fantail has a fatter body, and it’s often shorter-bodied than regular goldfish. Fantails are hardy, and can stay outside over winter. If there was a drawback to fantails, it would have to be that they are somewhat sensitive to sudden events of chilling, and they are prone to “flipover”. Despite that, I think I would own some of these if I were going to keep some Goldfish.

Shubunkins
Shubunkins are probably my second favorite Goldfish variety for pond keeping. The

Shubunkin is a typical goldfish variety with a torpedo shaped body. They have rounded heads and a blunt snout. Their fins may be long or short. They are always calico’d in color, always having at least three colors and black freckles. They are exceptionally hardy, and the come in several gorgeous calico patterns. The most desirable is the pale blue with black flecks, and large bright red blotches throughout the skin. Shubunkins which are predominantly black, or the ones which are mostly orange with black freckles are amazingly popular but these colors are not prized by the breeders. The Shubunkin is the largest of the Goldfish. It is surpassed in size only by the Koi or Koi-Goldfish hybrid.

The Sarassa Comet is supposedly an American breed. The fish is constructed just like a Comet Goldfish except it’s base color is pure bright white and it’s second color is bright crimson. The red looks almost “neon” red. The Sarassa is not gifted with extraordinary size or health. It is not prone to disease nor is it particularly resistant. The Sarassa Comet is my personal favorite among the Goldfish varieties suited to pond existence. They say it was created by crossing the Red Cap Oranda with the regular Comet Goldfish.

The Ultra Fancy varieties of Goldfish include the Ryukin, the Ranchu, the Oranda, and the Black Moor. There are unnumerable other types but the ones I listed here are the ones commonly kept in outdoor pools with success. The problem with the Fancies is that they require more pampering than the fish we’ve been talking about. Their fins grow to be quite lengthy and are attractive for other fish to chew up. This is common. These fish are more prone to disease because they are highly inbred variants. The larger they get, the less likely it is that they will make it through the winter outdoors without health hazard. On a positive note, I HIGHLY recommend that you put your Ranchu’s outside in summer for monstrous growth, but bring them indoors in the Fall. Being raised outdoors also increases the intensity of the coloration in all the fancy and non fancy goldfish varieties.

Koi are the “magnum” of the pond fish. They are typically the largest fish you could contemplate keeping in your garden pond. They are brightly colored, and there are dozens of widely recognized patterns which helps keep the interest in the hobby. The fish can range from a base color of grey, to brown, to a lustrous white or platinum color. My personal favorite is a fish with a base color of yellow. Koi may be patterned with red or black spots, areas, or scales. Sometimes, a Koi is white, with no other color except a red spot on it’s head. This is called the Tancho Koi; and is highly prized. Koi may live much longer than their owners if properly cared for. They are naturally acclimated to rivers, and so water-circulation in their pond is very much appreciated by these large, peaceful fish. Despite their varities, colors and amazing popularity, Koi are basically just “carp”. In fact, they are referred to scientifically as “Cyprinus carpio” which is the same nomenclature as the common river carp. The plain old brown carp that folks used to catch all the time when they were kids is the self same fish as the Koi. The primary difference is that the Japanese have spent generations breeding a prettier, better formed fish. That’s there the expense of Koi comes in. Koi sold in North America are being bred in Asia and in America. Of course, Koi are being bred worldwide but what you’ll commonly see are either Imported, or Domestic. I need to explain this.

Domestic Koi
Domestic Koi are bred and raised in North America for sale in North America. The American breeders are usually aquaculturists who are trained to provide ornamental fish for the hobbyist. They generally aren’t gifted to have a family background in Koi selection and so very often, the hobbyist looking at Domestic fish will notice that the colors aren’t as intense, the patterns are not nearly as crisp, and the body-shapes are not as pleasing. Still, the fish are very inexpensive compared to the Imports. I’d highly recommend that you choose domestic Koi as your starter fish. Learn all you can about how they’re cared for, make your mistakes, and then when you’re sure you can do well, step up to the color and refinement of the Import.

It used to be that when you would mention “Imported” Koi, such fish would only have originated from Japan. It is there, in Japan, that breeders have spent many generations coming up with the incredible color and patterns of the “modern Koi”. More recently, the Israelis and the Chinese have bought a considerable number of Japanese export fish and begun to breed them in their respective countries. It is thought that soon, the Chinese will out produce all other countries which produce Koi, combined. Almost half of the final cost of an Import fish is in the shipping of that fish from its Asian homeland to the purchaser over seas. It is rare to find Japanese Koi of any size for less than twenty five dollars. Those kinds of fish don’t sell well in all markets, and these fish should not be considered for the beginning hobbyist. The stakes are too high, economically, to stock with these expensive fish and then kill them all with simple mistakes. It is believed that imported Koi are not as durable as the domestic varieties and I am sure as a veterinarian who treats many fish, that this is true.