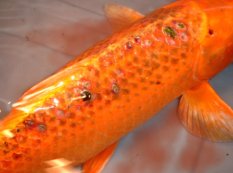 Bleeding from the gills is not uncommon in the springtime and is almost always ONLY seen in female fish, after some stress, such as capture, or injection.
The theory is that high levels of reproductive (estrogenic) hormones make the tissues more ‘friable’ or soft and then these highly vascular tissues can suffer some bleeding when the fish is stressed. This should not alarm you, especially when your Kois’ handling will be rare.
There is not a recommended treatment, except minimizing handling stress and providing ample space and plenty of fresh, well aerated water before and after handling.