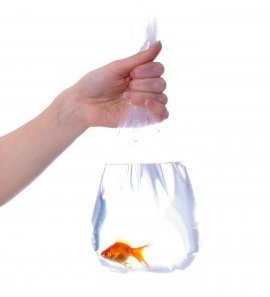 Aeromonas species are associated with gastroenteritis and with wound infections, particularly wounds incurred in outdoor settings. On May 1, 1988, isolates of Aeromonas became reportable in California, the first state to mandate reporting of isolates of and infections with these organisms. Surveillance data for 1988 and 1989 represent the first population-based estimates of both the occurrence and public health impact of Aeromonas infections in the United States and provide a basis for assessing the need for further surveillance of these organisms.

From May 1, 1988, through April 30, 1989, clinicians and clinical laboratories in California reported 225 Aeromonas isolates from 219 patients. Cases were reported on Confidential Morbidity Report cards to local health departments, which then conducted case investigations and forwarded their reports to the California Department of Health Services. Of the 225 isolates, 178 (79.1%) were recovered from stool, 19 (8.4%) from wounds, 11 (4.9%) from blood, and 17 (7.6%) from other sites. A. caviae was recovered from seven stool cultures; A. sobria was recovered from two stool cultures and one vaginal culture. All other cultures were reported as A. hydrophila or Aeromonas unspecified.

Based on reported cases, the incidence of Aeromonas wound infections in California was 0.7 per million population. Of the 19 patients with wound infections, 13 were injured outdoors (Table 1). Six of these patients required hospitalization for their injuries and/or infections. One patient had a mixed infection including Aeromonas, Proteus, and Pseudomonas species. The number of infections peaked in the summer months with three cases each in July and August. The cases reported among persons aged 30-39 years represented the highest incidence rate for all age groups (1.4 per million). Reported by: SB Werner, MD, Infectious Disease Br, GW Rutherford, III, MD, State Epidemiologist, California Dept of Health Svcs. Div of Field Svcs, Epidemiology Program Office; Enteric Diseases Br, Div of Bacterial Diseases, and Epidemiology Br, Hospital Infections Program, Center for Infectious Diseases, CDC.

Editorial Note: Aeromonas species are gram-negative, facultatively anaerobic bacteria found in soil and fresh and brackish water worldwide (1). Although Aeromonas species were recognized in 1891 as colonizers and pathogens of cold-blooded animals, especially fish (2), they were not identified as human pathogens until 1968 (3). Since then, they have been associated with a wide spectrum of human diseases (especially in immunocompromised patients), most commonly gastroenteritis (4) and soft tissue infections (5).

The taxonomy of Aeromonas species requires further clarification. Three species, A. hydrophila, A. sobria, and A. caviae, have been associated with human disease (4), but DNA hybridization analyses support seven or more distinct genotypes (6). Because many clinical laboratories are unable to perform precise identification, many aeromonad isolates are reported as

hydrophila or A. hydrophila complex. Although the California surveillance data provide limited information about the morbidity of the wound infections reported, they suggest that the public health impact of these soft tissue infections is low and may be determined more by the nature of the underlying injury than by the presence of Aeromonas organisms.

The California data do not provide information on case management. However, one reported case series (7) suggests that surgical debridement is an important component of treatment and has enabled resolution of the infection when either no antibiotics or ineffective antibiotics (i.e., antibiotics to which the organisms were resistant) were used. These findings, as well as the occurrence of Aeromonas organisms in mixed infections, suggest that in some cases Aeromonas species may be colonizers in wounds rather than pathogens.