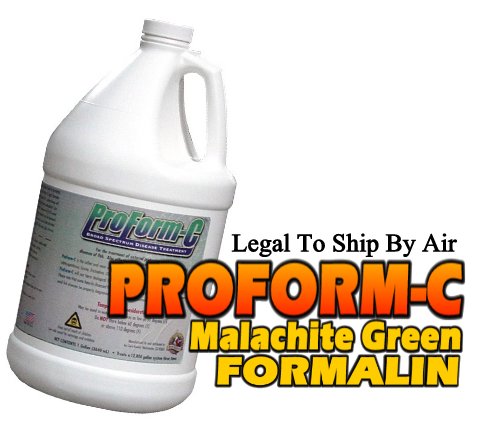 How to use Formalin in Aquaria:

Research has shown that the fish need only be in the Formalin at 25 ppm for a mere 6 hours to benefit from the parasiticide. I usually recommend that folks leave the formalin in, (and the filters out) for 12 hours, then do a 50% water change and replace the filtration to the system. Give the fish a day off, then repeat the treatment, two more times, total treatment period is 9 days.

Formalin has also been used as a dip, prior to, or after the sale of a fish. I discourage this. Doses of Formalin required to clear surface parasites in short periods of time present a great stress to an already stressed specimen. Gills that may have been damaged by pH and ammonia stress in the shipping bag cannot easily adapt to being further burned by formalin. In truth, the treatment is fairly effective, but salt dipping is preferred, and less toxic/caustic to the fish.

If you want to use Formalin as a dip on a fish that has NOT been shipped or severely stressed, I would recommend a mere 50-100 ppm (2-4 cc per 10 gallons) for no more than 1 hour, much less if respiratory difficulty is seen.

Question: How will Formalin affect my filter? I cannot remove the media!

Answer: Formalin will kill alot of the filter bacteria, causing ammonias, and then nitrites, to accumulate in the system. One thing you can do to reduce this is to remove the ‘stacks’ from the under gravel filter, or in some way abbreviate flow of treated water through the media, and also to abbreviate feeding to one, small feeding per day. One problem with this: If you are combatting a pathogen like trematodes (flukes,) then the obstruction of the flow through the gravel may spare the filter bacteria, but also may spare the lives of the developing eggs or embryos of these parasites.

Question: What signs should I look for to tell me the fish are in trouble?

Answer: Signs of respiratory distress are suggestive that the fish are in trouble. You should do an immediate, partial water change with dechlor, or remove the fish to a remote system at the first sign of real gasping. The fish do not have much time when hanging on the surface, and there may have been some miscalculation in the system volume, the dose of formalin, or the temperature may not have been considered.

Question: How toxic is formalin to me? How long does it last in the system if not changed out?

Answer: Formalin is a known carcinogen for humans, if contacted long enough. It is also a skin sensitizer, causing eye and throat irritation when in contact with these surfaces. Obviously, you don’t want to drink it. Formalin’s dissipation from a system is governed primarily by the amount of organic material in the system, in other words: In a glass jar of clean, non-agitated water, the formalin would stay in solution for a very long time, but in a mud bottomed pond, would be bound out within 5 days, truly, more like within 3 days.

Question: I heard that Formalin cannot be used with salt. If I treated with salt first, do I have to remove the salt before using Formalin?

Answer: I have treated a large number of fish with salt. In two years of practice, but I have only used not quite one gallon of Formalin. Does that tell you something about the utility of Formalin when salt is available? To answer your question: EVERY time I used Formalin, (and this would be echoed industry wide), I have used it concurrently with Salt. No problem. I am NOT saying that the combination is safe, I am just saying that I have ONLY seen this problem in print, not in practice. There is a difference. 2010: In the Northwest and the desert environments like Reno and Norther California I get feedback that in HARD water they can’t use much Formalin and Salt together. There appears to be a safety effect in soft water like we have in Georgia. IN hard water I must go with the experiences of others and discourage it

Question: When DO you use Formalin Dr. Johnson?

2010 Note: I have been pushed into more and more Formalin use due to a slight rise in the number of Costia cases. I think Costia is starting to be overrepresented because it is the “last man standing” after salting.

2018 Note: Mardel Clout is better at Costia and can do most of what Formalin can do.