To nutshell this for the 2018 user, I love this stuff made up in a gallon jug of DISTILLED water. Fill a spray bottle with that mix. Put fish to be treated in a large plastic fish bag. Spray the Tricide Neo into the bag til the fish are just covered in the stuff. Leave them in the bag until you start to worry about them. Or three minutes.  Put the fish back into the water.

Tricide Neo
This is kind of a long story but I will try to keep it to the nuts and bolts. In fact, I think I’ll kick it off with an “abstract” for those of you on a time schedule, see the inset box immediately below.

Abstract
Premise: People dislike doing, (or cannot get) injections of antibiotics for bacterial infections in Koi and Goldfish.
Fighting infections involves correcting or optimizing environmental conditions but definitely also includes starting some sort of antibacterial therapy.
Tricide Neo fights infections like nothing else out there. Tricide Neo arrives as some crystals in packets. Theres a one gallon and a five gallon size. You dissolve the crystals and then simply dip or spray the fish with the solution. It can be re used, and it’s stable for over a year in solution. It’s simpler to “dip” fish to recovery. On the downside, this is very powerful medicine and will kill your beneficial bio-filter bacteria if it’s allowed to get back into the main pond on the fish*. So, rinse the fish in a clear water rinse before replacement in the main facility.

*It takes a pretty good bit of Tricide Neo to harm the filter. But in a 100-200 gallon hospital tank it might matter.

Dr. Johnson’s Opinion: Tricide Neo Dip is excellent. Nothing I have seen comes close to this breakthrough in the treatment of Ulcer disease, fin rot, or especially mouth rot when injections are not feasible.
Recommendations for perfect deployment:
A Tricide Neo dip COUPLED with a high quality, heavily-medicated food should ‘do the trick’ in nearly 100% of bacterial infections. In other words, Tricide Neo and [medicated food unavailable due to FDA] would be where I would stake my reputation.
Is Tricide superior to injections? From a legal standpoint, yes. But from an efficacy standpoint, No. But I might offer that Tricide is performing just as well as injections, or certainly “as close as you could get” to their effectiveness. Far superior to any “antibiotic” dip (such as Furazone) which I at one time had a higher regard for.

Background: In the summer of 2002 I started hearing about a “Vicki Burnley” from the University of Georgia. I wondered, who is this person? Without more details available, I just thought nothing more of it.
Then I had a case in Marietta I was house-calling, a pond full of super-fine Japanese imports which were dying, and breaking down with body sores, gill rot, and other disorders stemming from bacterial infection. We injected all the fish, fed medicated food, and improved water quality as much as we could. The fish continued to die.
Three weeks into the disaster, Vicki Burnley was addressing the Atlanta Koi Club at this residence and as part of her presentation, she administered Tricide Neo dips to the Koi patients.
On my return to the pond, the customers came out and indicated all the fish swimming around. Two straggler fish, too poor to be saved were destined to go on and die but the rest had made an amazing recovery. I was stupefied. And so I searched out this Vicki Burnley and introduced myself. As a result, I was invited to University of Georgia to see the Aquaculture operation she is working on there, and I met the gal. She’s great. I found her personable and not at all “on a high horse.” She shared with me everything I wanted to know about the Tricide Neo and how it works.
Since I was introduced, I’ve sent Tricide Neo on quite a few test cases and all of them come back with glowing reviews. And no more shots of antibiotics.
What is it?
Tricide Neo is a concentrate of NeoMycin (although many different antibiotics could be potentiated) with an antibiotic potentiator. The folks at Molecular Therapeutics say it best so I will quote them:

“The antibiotic potentiator in Tricide-Neo has a rather interesting mode of activity that facilitates its spectrum of activity. Tricide-Neo creates holes (Figure 2) in the bacterial cell wall which in-turn allows antibiotics to flood the organism, destroys the effectiveness of the bacteria’s efflux pump and facilitates osmotic collapse of the bacterium. Because the potentiator causes direct physical damage to the bacteria, one is able to use less antibiotic than would normally be necessary and exposed bacteria are less likely to develop resistance to the chosen antibiotic.”

Basically, the chemical base of Tricide Neo knocks holes in the bacterial cell wall while sparing sensitive fish tissues. As if being perforated would not kill the bacteria, there’s Neomycin in the mix to kill the bacteria through these pores in the cell wall.
What you get is a packet of dry crystals. Helpfully, the Tricide-Neo packet is covered in instructions and is easy to use. More on this later. You open the packet and dump the crystals into either a one gallon jug of distilled water, or a five gallon pail or tub with distilled water in it. Once the crystals are dissolved, the fish are processed through the tub for anywhere from four to seven minutes*. After the dipping; the fish should be rinsed off in a post-dip of pond water, and then replaced in the pond or hospital tank.

*The above was the original packaging and the way they used it in their studies. But it ended up with a cooler full of pink bloody mucusy water from all the sick fish going through it. So I came up with the Spray in the Bag method. Three minutes. 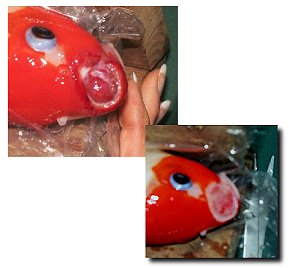 Tricide Neo was used in the fish at left, belonging to Mike and Jennifer. Availability of antibiotics in the form of injections is limited and promises to become more so; over the next couple years. Especially with mouth rot, the fish is unlikely to want to eat with the sore mouth, so the efficacy of medicated food becomes limited.
This fish belongs to Mike and Jenny and they treated the fish with Tricide Neo and recovered it. Amazing results for an antibacterial dip.
Precautions:
Anyone with a stop-watch should be able to do this with success but there are some precautions, the most common mistake is being the use of contaminated dip. For starters, you can’t mix Tricide up and use it on two or three different groups of fish because you could transmit diseases between groups. All fish in ONE pond can be treated with no risk, but you would not carry that dip down the street to a neighbor’s house. (This is beat by the Spray in Bag method)
If the fish bleed in, or “slime-up” the solution, it needs to be preserved before it’s next use the following day. Some folks have put it through a coffee filter or an un-dyed terrycloth towel to remove as much cellular and organic slime-debris as possible, then refrigerate. (This is beat by the Spray in Bag method)

Tricide should be brought to an accommodating temperature before use the next time, so as not to shock the fish.
You should check the pH of the solution before every use if it’s being used as a dip for lots of fish. (This is beat by the Spray in Bag method)

“Dip Quality” is hard to maintain when there are a lot of fish being run through the dip solution and the dip tank needs to be aerated heavily.

Spray Method.
You can mix up a solution of Tricide Neo and spray it on. Simply mix up the solution and put some of your gallon-mix in a small sprayer bottle and put the fish in a plastic bag and then spray the fish on it’s wounds, with the Tricide. What’s the advantage? You can use less Tricide this way, and also, hopefully, not have to use the Tricide over again the next day. REASON: A fresh sprinkle or misting of brand new Tricide for a few minutes would be superior to a stale dip the next day, if it’s economically feasible.
The Shake and Bake Method
Is essentially the same as the above Spray method except that you would simply place the fish in a plastic bag and then pour in just enough Tricide Neo to cover the fish and allow gill coverage for it to “breathe” – leave the fish in the solution for a three to four minute dipping and then move the fish to clean fresh water. The Shake and Bake bag can be reused until it looks “nasty” and then a new bag prepared. Again, the advantage is in “not sullying” your whole dip container, and just using a little new Tricide Neo on each fish until you run out.
Normal Tub Method
You’d simply mix up the crystals in distilled water, fill a one gallon tub or a five gallon tub depending upon what you’ve bought, aerate it, and then dip the fish in there for about four minutes. When the dippings were over you could try and clean the solution by pouring it through an inert textile like polyester fiber fill, coffee filter, or an undyed cloth. Then refrigerate the solution for use later.  (This is beat by the Spray in Bag method)
DO NOT re-use any solution on a different group of fish in case you should transmit an undetected or unknown pathogen from one group to another.
Pros:
It’s simple to dip a fish for four to five minutes. Solution has a long shelf life before and after reconstitution. Solution can be sprayed on, or “Shake and Baked”
Cons:
If fish are left in Tricide Neo solution too long, they will suffer skin, fin and gill damage. If the solution fouls, it must be replaced. Using fouled or contaminated solution can hurt your fish but your eye and nose can tell if the solution is “good” anymore or not.

At retail:
There are quite a few sites which offer Tricide Neo for sale and you should be seeing more and more of it on dealer’s shelves as well. Thank gosh for Google!  LOL

Dr. Erik Johnson is a veterinarian and has kept fish as pets since 1973
This article is not authorized by Molecular Therapeutics and is not written with their permission. It recounts my introduction to Tricide and my clinical impressions.