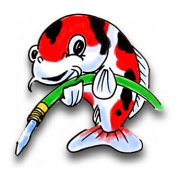 Water Changes for Ammonia Control
(Trickle Systems Are Far Superior)
Written by Dr Johnson
If fish are suffering illness due to any obvious [tested and confirmed] deterioration of water quality such as ammonia, you are well advised to begin a systematic daily changing of 20-40% of the total volume in the system.
There are some important points to consider before going out and wholesale / aggressively changing the water.
First, make sure the water change does not radically change the temperature of the system.
Secondly, be sure that the waterchange does not result in truly electrolyte poor water. One test of this is the Total Alkalinity, but other salts are important as well. It might not hurt to add a teaspoon of salt per gallon of water in any major waterchange where live plants are not being maintained. This will ease the stress of the change on the fish and stimulate the production of a healthy, protective slime coating.
Scaleless fishes will not be harmed by that salt dose, the salt to use would be either non iodized table salt or sea salts. (Iodized salt is actually “not dangerous” based on considerable clinical experience)
The final consideration in doing daily, massive waterchanges, is to be sure the pH is not fluctuating wildly with each change. Does the tap water resemble the pH in the system?
As a side note, be careful about adding all sorts of fancy water conditioners to the water. For example, the product that rhymes with Press Coat is a synthetic agent that coats the fish with a protective coating. Neat. But consider that until it is reformulated, it can be a detriment because the gills are coated as well. This can complicate respiration where the gills were not functioning beautifully to begin with. Generally speaking it’s FINE

Another set of chemicals are sold to bind Ammonia. They use aldehydes to accomplish this feat. The aldehydes can accumulate and become caustic to fish if no ammonias are actually present. They are useful, but should be used sparingly and judiciously.

So, to re-cap, change 20-40% per day, watching temp and supporting Total Alkalinity and electrolytes. Consider adding a teaspoon of salt per gallon with the changes, and finally, don’t go overboard on the water conditioners.

On the long term, Constant Inflow Water Changes (trickle) are a good idea. Installing a “drip irrigation system” TO a pond or tank brings SLOW inflow of new water, and a simple overflow device (overflow box) lets water leave the system. Ideally, you would replace 10-20% of the system volume per week. This is a VERY low flow taken on the 24hr x 7d cycle. No dechlorinator is needed.

The pundits will attack the assertion that ‘no dechlorinator is needed for drip irrigation water changes’ BEFORE they do any math on just how much “New” chlorinated water is in the system at any given time.